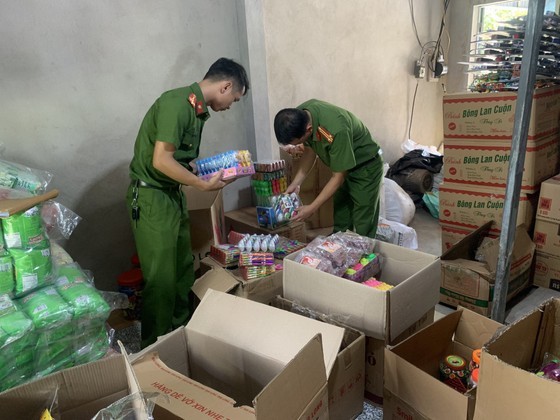 According to police, the Environmental Police Department and local police yesterday raided a house at Dang Dung Street in Tang Giang Ward in Ha Tinh City owned by a 44-year-old woman in Ha Tinh City discovering an amount of about 1,120kg of confectionery of unknown origin.
Various kinds of confectionery including biscuits, cakes, coconut jelly, braised beef, and mixed rice paper were found in the house. The woman could not produce documents of the origin of the aforementioned confectionery while working with police officers.
On the same day, the working group of the Environmental Police Department of Ha Tinh Province Police coordinated with the Police of Cam Binh Commune in Cam Xuyen District in the Central Province of Ha Tinh discovered a commodity without a clear indication of origin at a local food business owned by a 34-year-old woman. The woman was unable to give police officers documents of the origins of wood ear mushroom bags with a total weight of 200 kg.
Previously, at 8:50 a.m. on August 29, the working group of the Environmental Police Department of the Ha Tinh Provincial Police Department and the Ky Bac Commune Police in Ky Anh District in Ha Tinh Province discovered a food business facility selling confectioneries including 2,061 bags of cakes and candies including jelly candy, strawberry candy, candy chocolate, soft drink bottle-shaped candy with a total weight of 55kg. These commodities have an unknown origin and do not meet food safety regulations.
Currently, the Environmental Police Department of Ha Tinh Provincial Police is continuing to verify and handle business establishments in accordance with the law.