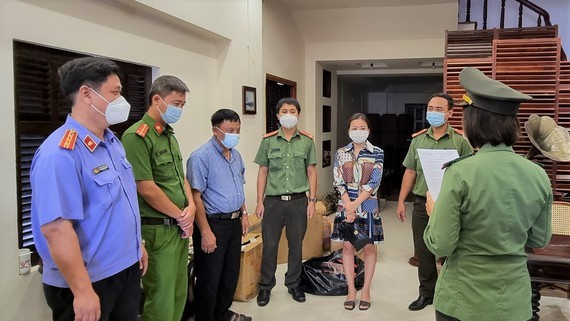 After the prosecution, the Investigation and Security Agency examined Thuy Tien’s accommodation in Hoang Anh Gia Lai Lake View at the address of 72 Ham Nghi Street in Thanh Khe District of Da Nang City, as well as her two offices on An Nhon 2 Street in Son Tra District and on Hoang Van Thu Street in Hai Chau District.

Initial investigation revealed that when harboring those 300 Korean people, Thuy Tien earned US$400 commission from the group organizing illegal entrance to Vietnam.

This group is led by 53-year-old Lee Kwan Young, Vice Chairman of the Korean Association in the Central Region, and 48-year-old Seo Young Jin, Director of Han in Hue Co. Ltd. The group had been previously discovered and destroyed by Da Nang City Public Security Department.

At the beginning of 2021, Thuy Tien used the legal entity of Mai Vang Translation Co. Ltd (sited on the 6th floor of Camellia Building at the address of 773 Ngo Quyen Street in Son Tra District) to sponsor You Woon Yong to Vietnam as a specialist.

In reality, however, this translation company has no demand for a foreign specialist. When coming to Vietnam, You Woon Yong did not work for the company either.