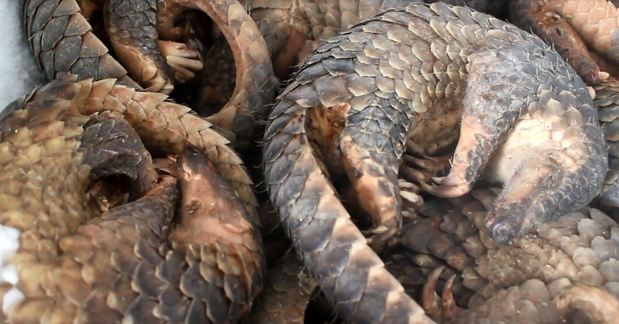 During a raid on the house of Long's older brother in September 2018, the Environmental Police Department under the Ministry of Public Security, in collaboration with local police, detected 32 sacks containing 780 kg of pangolin scales without a certificate of origin. Long later admitted that he was the owner of the goods.
The goods include 225 kg of giant pangolin and 555 kg of white-bellied pangolin scales, worth nearly VND1.1 billion  (US$48,000).
These pangolin species do not exist in nature in Vietnam and are listed in the United Nations Convention on International Trade in Endangered Species (CITES).
The court also ordered the destruction of the confiscated pangolin scales.
Bui Thi Ha, Deputy Director of Education for Nature Vietnam (ENV), said this is the first case relating to African pangolin scales brought to trial in the past five years.
With the severe punishment and the decision to destroy all confiscated pangolin scales, the People's Court of Hung Yen province showed the spirit of no tolerance for wildlife-related crime.
It served as a warning to those who have earned money illegally from wild animals, she said.
Earlier, in July 2020, the provincial People’s Court also sentenced Nguyen Dinh Hong, who lives in the central province of Ha Tinh’s Tay Son town, to 16 years in prison after being caught red-handed transporting 116 pangolin individuals.