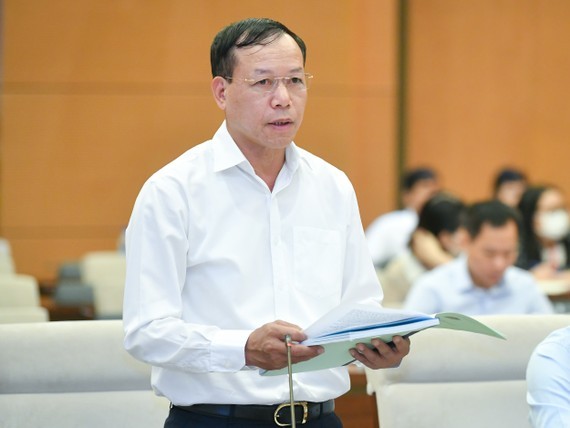 In addition, journalists shall be fined from VND 7 million (US$299) to VND 15 million for recording audio, video, or audio recordings by the trial panel without the consent of the presiding judge, audio recording, video recording or audio recording of procedure participants without their consent, or audio recording, video recording or recording with audio of the court hearing and broadcasting it live in cyberspace.
Regarding acts of violating the rules of court sessions or meetings, other acts of obstructing legal proceedings, draft regulations on fines ranging from VND 500,000 to VND 1 million for journalists who don’t show their press cards at the court's requests when attending court sessions to report on the court's developments and journalist who did not comply with the control of the presiding judge on the area of work.
At a meeting of the National Assembly Standing Committee this morning, Standing Deputy Chief Justice of the Supreme People's Court Nguyen Tri Tue commented that more and more people have had actions obstructing legal proceedings, causing difficulties for the settlement of cases, significantly affecting the quality of case settlement of competent agencies and persons, the sanctity and authority of the judiciary.
In order to deter people from making such actions, the draft stipulates the main form of sanction for acts of obstructing legal proceedings with warnings and fines, in addition to confiscation of material shreds of evidence and means of violation.
An individual interfering  judicial processes and court proceedings will receive a fine up to VND40 million meanwhile an organizations will pay up to VND80 million.
The Ordinance also specifically shows acts of obstructing criminal proceedings, acts of obstructing civil and administrative proceedings, considering and deciding to apply administrative handling measures at people's courts, sending drug addicts aged from full 12 to under 18 years old compulsory detoxification establishments, aircraft arrests, ship arrests and violations of the rules of court sessions and meetings, and other acts obstructing legal proceedings.
In addition, the draft also stipulates that acts of obstructing legal proceedings by lawyers and legal assistants have higher fines than other procedure participants. This provision only applies to lawyers, legal aid officers participating in cases or cases as defense counsels, representatives or defenders of lawful rights and interests.
Because during their practice, lawyers must comply with the Constitution, the law, the code of ethics and professional conduct for lawyers, and the rules of the legal aid profession. Moreover, they must be honest about the truth contributing to protecting justice and fairness, Mr. Tue said. Therefore, if lawyers or legal assistants take advantage of their position and legal knowledge to violate the law and obstruct the procedural activities of competent agencies and persons in political judgments, they need to be severely punished.