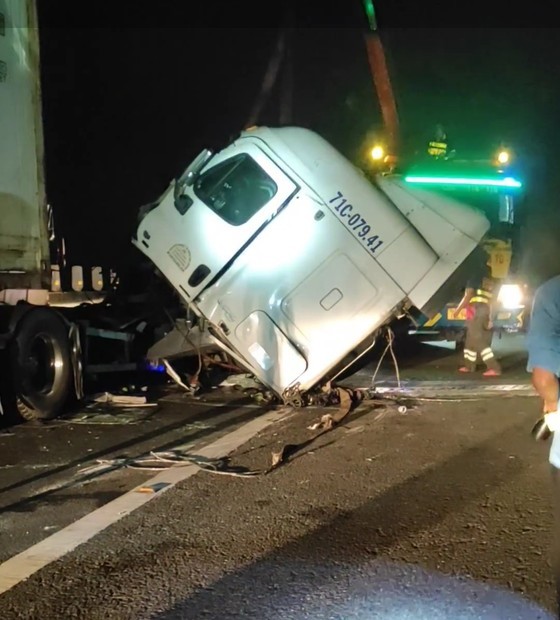 The scene of the accident. (Photo: SGGP)
Earlier, at around 3:55 a.m. on the same day, container truck 71C-079.41 traveling on the HCMC - Trung Luong Expressway from the Mekong Delta to HCMC suddenly hit the rear of the 63H-017.61 truck that was stopping in the car lane close to the median strip when arriving at km42+ 300 in Tan Hoi Dong Commune, Chau Thanh District, Tien Giang Province.

The strong impact caused the container truck's cabin to fall onto the road. The driver was seriously injured and was taken to the hospital for an emergency.

At the scene, thousands of watermelons were lying on the road, and two vehicles damaged the front and the rear, blocking most of this highway in the direction from the Mekong Delta to HCMC.

Upon receiving the news, the traffic police came to the scene and coordinated with the highway management unit to regulate traffic and urgently remove vehicles from the scene.

According to authorities, initially, it was determined that the truck 63H-017.61 had a tire burst, so it stopped in the car lane near the median strip. Meanwhile, the container truck traveling in the same direction did not keep a safe distance, leading to the accident.

The traffic accident did not cause any loss of life but caused traffic jams extending to Tan An Intersection, more than 6km long.

The case is being investigated and clarified by the authorities.