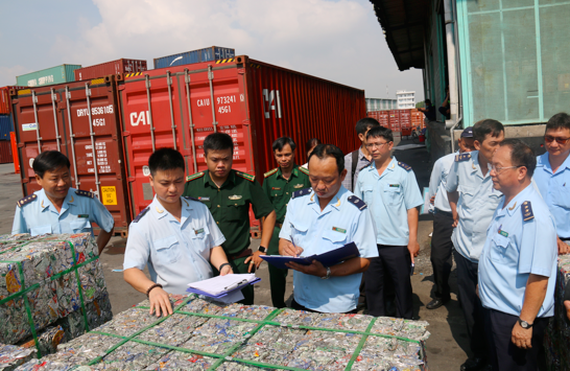 Initially, the police force identified that the arrestees above were related to the case of Hoang Duy Tien, the officer of the anti-smuggling team of PC03 and partners in crime that the HCMC Public Security Department had prosecuted in June of 2021. The above-mentioned arrestees are shop owners who hired Hoang Duy Tien to illegally import used machines overseas to earn profits from trading.
Pursuant to the investigation, Hoang Duy Tien had created 47 legal entities and performed procedures to import 1,282 containers transporting used equipment and machines from Japan, Taiwan (China) to Vietnam with a total tax value of over VND192 billion (US$8.2 million).

Hoang Duy Tien and his partners in crimes had taken advantage of the policy on allowing the import of used machinery, mechanical equipment and spare parts serving for production to create legal entities and customs declarations for the production purpose but they aimed at using the imported machines and equipment for trading in Vietnam to illegally earn profits.

In May of 2021, the HCMC Public Security and Saigon Port Zone 1 Customs Branch stopped the clearance for six customs declarations of six cargo containers transporting air compressors, lawn mowers and lathes of all kinds.