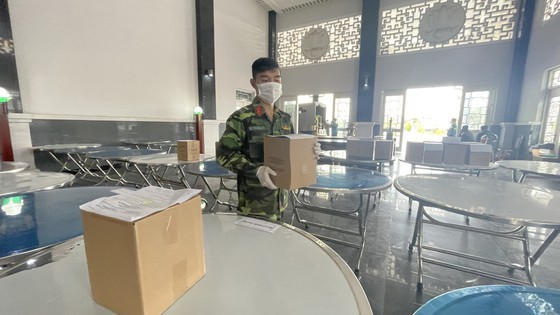 Military force receives ashes of Covid-19 victims from the Binh Hung Hoa Cremation Center and brings them to the City’s Funeral House. (Photo: SGGP)
According to the Police Department of Ben Tre Province, from 9 am on August 15 to 12:30 am on August 16, Le Phuc Hau, 28, a truck driver who is living in Vinh Long Province transported 46 remains, including 41 Covid-19 victims from HCMC to Ben Tre.

The driver violated the “green lanes” rules which allow vehicles to transport essential goods during the social distancing, said the Ben Tre Province’s police.
Under conducting of the HCMC Party Committee and People’s Committee, the city’s High Command has delegated Military command committees of 21 districts and Thu Duc City and local authorities to transport cremated remains of to their houses.
A special mission unit of the Advisory Board under the HCMC High Command was established to receive ashes of persons who died due to Coronavirus infection from the Binh Hung Hoa Cremation Center and bring them to the City’s Funeral House. Military command committees of 21 districts and Thu Duc City will be responsible for carrying cremains back home.
Pagodas will temporarily keep and organize requiem for cremains that have not been received by their relatives yet.
All funeral services for people who die from Covid-19 will be funded by the HCMC budget.