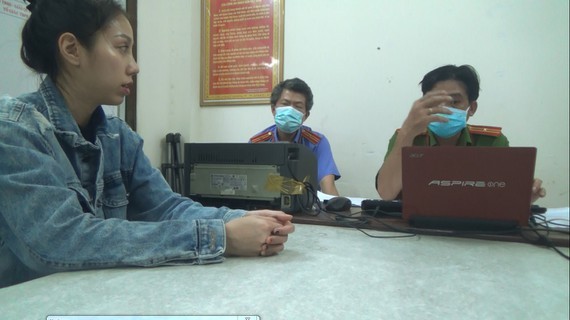 Vo Nguyen Quynh Trang at the Investigation Agency of the Binh Thanh District’s Police Department
According to the document released by the Government Office on December 30, the Deputy Prime Minister asked the Ministries of Public Security; Culture, Sports and Tourism; Education and Training; Information and Communications, the People’s Committees of provinces and cities across the country strengthen propaganda on child abuse and domestic violence prevention, child protection to safeguard children and their families as well as impose strict penalties on those convicted of family violence.

The Central Committee of Vietnam Fatherland Front and its chapters, the Central Committee of the Ho Chi Minh Communist Youth Union, the Vietnam Women's Union (VWU) Central Committee must encourage their members to identify and report cases of child abuse and strengthen the supervision of the implementation of the law on child protection.
Parents and guardians have to enhance their primary responsibility for the care and protection of their children and closely coordinate with the local authorities to implement children protection activities.
According to the Vietnam Women's Union, the hotlines of the “Peaceful House” program have received a double of a number of calls of domestic abuse victims in 2021.
On December 28, the Investigation Agency of the Binh Thanh District’s Police Department in HCMC approved a decision on prosecution and detention of Vo Nguyen Quynh Trang, 26, for child maltreatment that led to the death of an eight-year-old girl who is her lover’s daughter.
The Binh Thanh District’s Police Department in HCMC on December 31 has made an urgent decision to arrest Nguyen Kim Trung Thai, 36 who is convicted of an accessory charge in the death of his eight-year-old girl.
Trung is father of N.T.V.A, 8 who was beaten and tortured by his lover, Nguyen Vo Quynh Trang, 26 to the point of death.