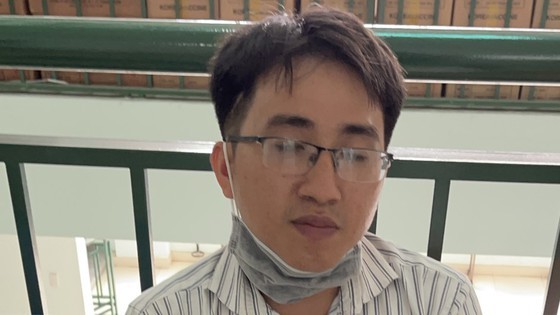 Son is captured by the police. (Photo: SGGP)

Because of business needs, T.Q.K. (Chairman of the Director Board of Dai Tho Nguyen Co.) applied for investment into constructing a waste treatment plant in Soc Trang Province and sought investors. At the end of 2018, thanks to his social network, K was introduced to Nguyen Van Muc (born in 1967 and living in An Giang Province).

Muc told K that he knew an acquaintance with large capital that could invest in K’s waste treatment plant. Muc then introduced K to Nguyen Tan Su (General Director and Legal Representative of Nui Chua Co.), Nguyen Thuy Long Phuong (CFO of Nui Chua Co.). These two people said they had close connections with banks, plus a foreign currency source of US$100 billion from HSBC Vietnam Finance Group JSC., to invest in the project.

Trusting them, K signed a contract with Nui Chua Co. to initiate the construction project in Soc Trang Province, with the total investment of VND2 trillion ($86 million) in the form of bank guarantee. He also gave all project documents to Nui Chua Co.

K then transferred VND570 million ($24,500) for the cost of document appraisal and was shown a written bank approval of a loan of VND250 billion ($10.8 million). K was also shown the ‘Letter of Credit and Approval of Non-refundable Investment Capital’ from HSBC Vietnam, signed by its General Director Tran Quang Son, with the content that “HSCB Vietnam approves a credit and cash amount for Nui Chua Co. and D.T.N Company, worth $250-500 million, a preferential for the construction project of Soc Trang waste treatment plant”.

Seeing this, K continued to transfer to Phuong and Su VND1 billion ($43,000) to carry out the guarantee for the construction contract.

When contacting the bank afterwards, K discovered that the letter of credit was a fake; and in December 2020, he sent accusation to the investigation police agency. After careful investigation, the police have prosecuted the accused, detained Su and Phuong. Son has been determined by the police to constitute the crime of fraud and property appropriation under the role of a helper.