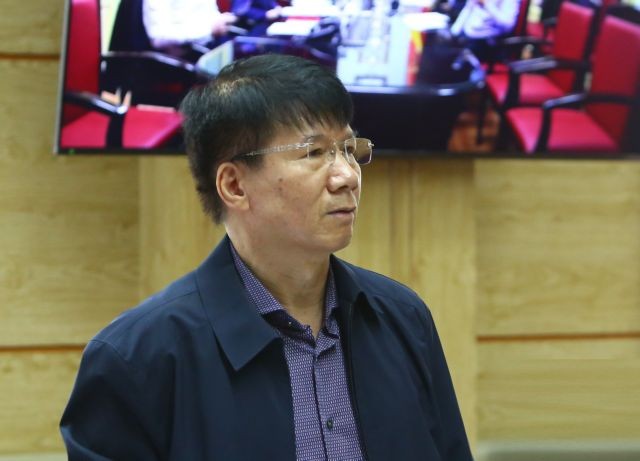 Deputy Minister of Health Truong Quoc Cuong. — VNA/VNS Photo
The alleged offence took place in 2014 when Cuong was head of the Drug Administration of Vietnam (DAV).
The decision was made following investigation of the case relating to “the trading of counterfeit medicines labelled as Health 2000 Canada; the lack of responsibilities causing serious consequences; and the abuse of positions and power while on duty”, which took place in HCMC, some other localities and at the DAV.
According to the police, during the 2010-2014 period, Nguyen Minh Hung, former chairman and director-general of Vietnam Pharma (VN Pharma) JSC and Vo Manh Cuong, director of H&C International Maritime Trading Co. Ltd. and a former employee of VN Pharma, and some accomplices faked a range of documents to change the origins of medicines as well as legalise procedures of the DAV to import these medicines into Vietnam. They were then resold to drug stores, hospitals and pharmaceutical businesses, causing great losses.
According to initial investigation on Cuong's case, Cuong worked as Head of the DAV from 2007 to 2016 and took legal responsibilities for all activities of the DAV. He was also the one who submitted to leaders of the Ministry of Health for approval of drug registration licences. During that time, he was alleged to have committed some wrongdoings.
Cuong was said to lack responsibility in assessing and granting licences for seven kinds of drugs; and lacked supervision and examination over those assessing and registering the drugs, leading to the approval of dossiers for the import and consumption of the seven counterfeit drugs, labelled Health 2000, in Vietnam with a total cost of over VND151 billion.
After the drugs were imported and consumed in Vietnam, although he received information about the suspected origins of the drugs, Cuong did not ask to stop their circulation, or recall and destroy the drugs. As a result, after November 21, 2014, many health establishments still traded and supplied counterfeit drugs labelled Health 2000 Canada without clear origins to treat patients.
Fifty-five out of 63 health departments said they had not received any information that the Health 2000 drugs were counterfeit at that time.
Cuong's activities were assessed as causing serious consequences, meaning many patients used drugs without clear origins and causing great public concern, according to the Investigation Police Agency.
Police searched Cuong's house and work place and he is currently banned from leaving his residence.
Relating to the case, in 2019, Hung, former chairman and director-general, was sentenced to 17 years in prison by the HCMC People's Court for importing fake medicine for cancer treatment.
Vo Manh Cuong, director of H&C International Maritime Trading Co. Ltd., and a former employee of VN Pharma, was sentenced to 20 years in prison on the same charges for “allegedly manufacturing and trading counterfeit medicines”.
Cuong said he was aware that the drugs had no clear origin, but still colluded with Hung who directed his subordinates to provide fake documents to get a licence for import of the drugs, according to the city’s People’s Procuracy.
The Investigation Police Agency said the DAV with the role as a specialised management agency of the Ministry of Health, helping the Minister of Health to carry out State management and law enforcement functions, took responsibility for letting these cases happen and showed criminal signs relating to the charge of “lacking responsibilities, causing serious consequences” and “abusing positions and powers while on duty”.
Relating to this case, Nguyen Viet Hung, former Deputy Head of the Drug Administration of Vietnam, Pham Hong Chau, former head of the Drug Registration Office and Nguyen Thu Thuy, former deputy head of the Drug Price Management Office, were also prosecuted.