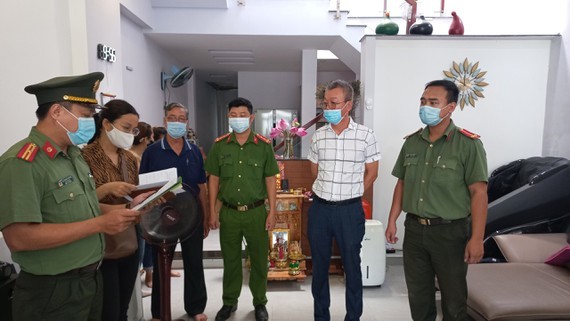 Da Nang City's police officers reach the residence of Lee Kwan Young (the second from right) - vice chairman of Korean People’s Association in central region as he involved in recent illegal entries to Vietnam. VNA/VNS Photo
The initial investigation showed that the suspects made contact with people who wanted to go to Vietnam via the internet. They then falsified immigration documents to say their clients were experts who were eligible to enter Vietnam during the Covid-19 pandemic.
Flights from South Korea to Da Nang were arranged by the three men with local companies guaranteeing the 'experts' would work for their companies.
Earlier this year, on April 26, Da Nang Police’s Immigration Desk and Ngu Hanh Son District police detected 14 South Korean nationals did not work the jobs they were registered to when applying for their Vietnamese visas.
On May 28, the city’s police arrested two Vietnamese women working for the so-called Korean People’s Association in Vietnam. They were Phan Thi Thao Ly, from Ngu Hanh Son District and Pham Thi Phuc, 25, from Thanh Khe District.
The two women said that their work at the association was to make, check and instruct people to complete procedures for South Korean people to enter Vietnam as experts.
The three suspects are Lee Kwan Young, 53 and Song Hong Sub, 49 years old, both residents of Ngu Hanh Son District; and Seo Young Jin, 48, living in Sơn Trà District.
Lee is known as vice chairman of the Korean People’s Association in the central region while Seo is director of Han in Hue Company and Song is the owner of KHAN VINA.