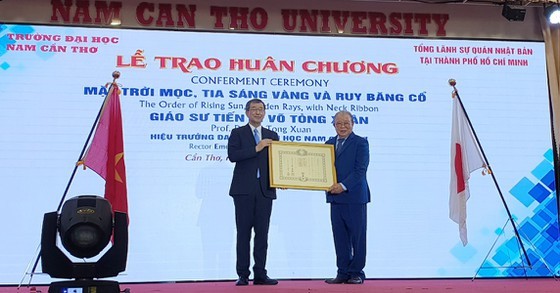 At the conferment ceremony

Mr. Watanabe Nobuhiro, Consulate General of Japan in Ho Chi Minh City, said at the conferment ceremony that the Order of the Rising Sun, golden rays and neck ribbons are awarded to those who have made many achievements and contributions to the development of Japan or the community in the field of diplomatic relations. Professor Vo Tong Xuan has contributed to the development of diplomatic relations between the two countries in the field of agriculture.

Since then, he has still maintained the academic exchange relationship with universities in Japan. Many researchers in Japan under Professor Vo Tong Xuan’s guidance continue to their research this day.

At the conferment ceremony, Professor Vo Tong Xuan was touched and proud of a noble achievement from the Japanese Government. He said this is not only his own achievement but also many generations have studied, researched and maintained.

After returning home, he worked at Can Tho University and together with Japanese researchers continued to carry out research projects on rice cultivation techniques. As a pioneer in academic exchanges between Vietnam and Japan in the field of agronomy, he has built a growing cooperative relationship between the two countries.