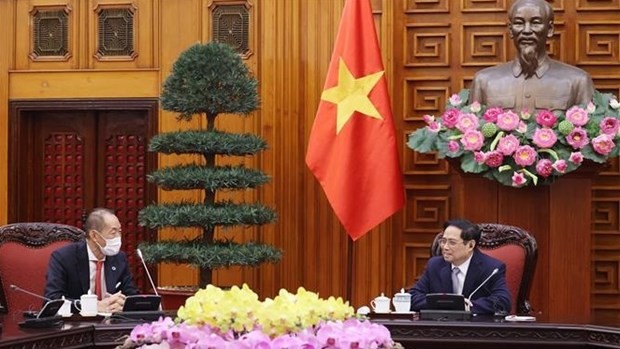 At the working session between Prime Minister Pham Minh Chinh and WHO Regional Director for the Western Pacific Takeshi Kasai. (Photo: VNA)
The program emphasises the role of vaccines and the protection of the most vulnerable groups, including the elderly and those working on the frontline of the pandemic combat, along with public awareness of preventive measures, Kasai told Prime Minister Pham Minh Chinh during their meeting in Hanoi.
He lauded Vietnam’s adjustment of measures to match the latest developments of the Omicron variant, and achievements the country has recorded in the fight, especially in the vaccine matter.
Kasai used the occasion to thank Vietnam for its timely support to other countries in the pandemic combat, and its contributions to WHO and the COVAX Facility.
Also present at the meeting, WHO Representative in Vietnam Dr Kidong Park said he supports Vietnam’s plan to improve the capacity of grassroots and preventive health care not only to drive back the Covid-19 pandemic, but also to effectively deal with population aging in the future.
The representatives expressed their impression on Vietnam’s performance in economic development and social welfare over the past time.
Both noted their belief that Vietnam will continue effectively controlling, and safely and flexibly adapting to Covid-19, and become a model in health care in the region and the world.
For his part, Chinh affirmed that Vietnam attaches importance to cooperation with WHO, and thanked the organisation and its Western Pacific Regional Office and Vietnam Office for their support to Vietnam in the medical sector, especially in accessing vaccines and medical supplies.
He briefed the WHO representatives on Vietnam’s vaccine strategy that focuses on the vaccine diplomacy, vaccine fund and the acceleration of vaccination.

WHO representatives expressed their impression on Vietnam’s performance in economic development and social welfare over the past time. (Photo: VNA)
Thanks to the vaccine strategy, Vietnam has become one of the six countries worldwide with the highest vaccination coverage, and shifted its strategy to safely and flexibly adapting to, and effectively controlling the pandemic.
With efforts in socio-economic recovery and development, Vietnam’s economy grew more than 5 percent in the fourth quarter of last year, pushing the national gross domestic product (GDP) in the year to 2.58 percent, even higher than that of 2020, he said.
Sharing Vietnam’s experience in pandemic prevention and control, the PM said Vietnam has seriously observed the WHO’s recommendations, offered aid to many countries, raised initiatives at regional and international forums, and voluntarily contributed to the WHO Covid-19 Solidarity Response Fund and the COVAX Facility.
He called on the WHO and Kasai to further their support to Vietnam in terms of vaccines and drugs, particularly the research, production and procedures for the recognition of home-grown vaccines.
The Vietnamese Government is working on plans to reopen schools as soon as possible, he said, suggesting WHO give advice to the country in vaccinating children aged from 5-11 years old.