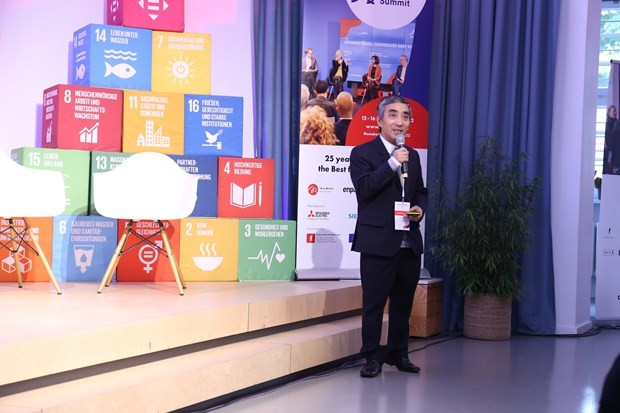 Nguyen Manh Hai, Counsellor and head of the investment promotion division at the Vietnamese Embassy in Germany, presents Vietnam's policies for facilitating investment in green growth at the AsiaBerlin Summit 2022. (Photo: VNA)

In his speech, Nguyen Manh Hai, Counsellor and head of the investment promotion division at the Vietnamese Embassy in Germany, said political and social stability and the strategic location are among favourable conditions for Vietnam to attract foreign investment. Low labour costs and a large, young, dynamic, skillful and industrious workforce have also added to the country’s attractiveness to investors.
So far, Vietnam has signed 15 free trade agreements (FTAs), including a multilateral one among members of the Association of Southeast Asian Nations (ASEAN), bilateral deals between the bloc and other countries, and Vietnam’s bilateral FTAs with the EU and some countries like Japan, Chile, the Republic of Korea, and the UK. The country has also been assessed as a one with an optimal investment climate and many investment incentives for investors.

Mr. Hai noted that Germany is one of the most important EU partners of Vietnam, which is the largest trading partner of Germany in ASEAN.

He stressed that Vietnam has a strong agriculture but the country is highly vulnerable to climate change.

Mr. Hai said the Vietnam - Germany startup networking event, held as part of the AsiaBerlin Summit 2022, was an occasion for introducing green technology startups to help the Southeast Asian country adapt to and minimise climate change impacts and protect natural resources and the environment.

The summit drew a large number of startups from across Europe and Asia, aiming to connect the firms to promote entrepreneurship and the realisation of the Sustainable Development Goals in the five topics of people, prosperity, planet, peace, and partnerships.

The AsiaBerlin initiative is intended to develop an international startup ecosystem between Asia and Berlin, thereby creating a foundation and initiatives to support startups in various fields.

This is the fifth time the Vietnamese Embassy in Germany has taken part in the AsiaBerlin Summit, which marks its 25th anniversary this year.

As part of the event, it also held the “Embassy Day” to introduce Vietnam to participants.