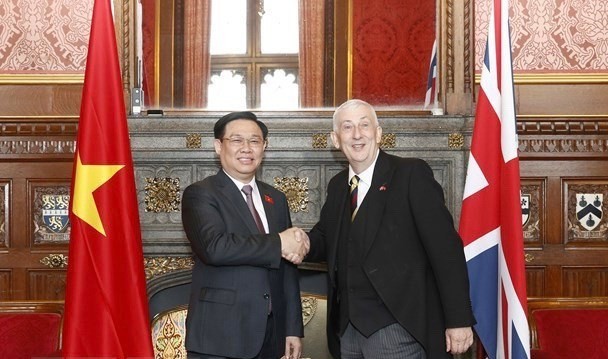 NA Chairman Vuong Dinh Hue (L) and Speaker of the UK’s House of Commons Lindsay Hoyle at their talks in London on June 29 (Photo: VNA)
Hue is on an official visit to the UK from June 28 - 30 at the invitations of Speaker of the House of Lords John McFall and Speaker of the House of Commons Lindsay Hoyle.
The two sides also exchanged views on their cooperation at multilateral forums and on regional and global issues of mutual interest.
They focused discussions on measures to further strengthen the Vietnam - UK Strategic Partnership and promote the role of the two parliaments in doing this.
They agreed to organize a variety of activities in trade, investment and culture as well as high-level delegation exchanges in celebration of the 50th anniversary of the Vietnam - UK diplomatic relations next year (1973 - 2023).
NA Chairman Hue said his visit to UK aims for the two sides to chalk out new directions and solutions to make the multi-faceted bilateral cooperation more effective and better coordinate at multilateral forums.
Both legislators expressed their delight at the growing Strategic Partnership between the two countries and that the bilateral relation is at its best, with regular delegate exchanges, meetings and talks.
Hue emphasized that the UK, a global powerhouse, holds an important position in Vietnam’s foreign policy while Hoyle described Vietnam as a developing, dynamic country in the strategic Southeast Asia region.
Hoyle expected Vietnam to promote its role at multilateral forums and in addressing global issues, including conventional and non-conventional security challenges.
Regarding economic affairs, the two sides held that two-way trade and investment have been seeing dynamic development thanks to legal foundations provided by the UK - Vietnam Free Trade Agreement (UKVFTA).
The British lower house speaker proposed the two countries to leverage the UKVFTA so as to enable British enterprises to expand investment in Vietnam, particularly in the fields of green finance, pharmaceuticals, healthcare, digital technology, education, start-up and innovation, infrastructure development, clean energy and others.

The talks between NA Chairman Vuong Dinh Hue (L) and Speaker of the UK’s House of Commons Lindsay Hoyle in London on June 29 (Photo: VNA)
In terms of education, the two sides shared the view that their countries have cooperated fruitfully in this field over the past years, with 12,000 Vietnamese students now studying in the UK. However, educational cooperation still has much room for growth and needs to be prioritized since investing in education means investing in the future.
Chairman Hue asked the UK to provide more government scholarships for Vietnamese students and encourage major universities to open their branches in Vietnam.
He also took the occasion to ask the UK Government, parliament, and people to continue creating conditions for the Vietnamese community to integrate into and contribute to local society and help with their homeland’s development. In response, Hoyle agreed that Vietnamese people, including students, are a very important bridge linking the two countries.
The top legislator of Vietnam highly valued bilateral collaboration in health care and science – technology, appreciating the UK’s donation of nearly 3 million Covid-19 vaccine doses to Vietnam via the bilateral mechanism and the COVAX Facility, along with medical supplies worth GBP500,000 (over US$600,00) via UNICEF.
The two leaders agreed on the necessity to enhance cooperation in dealing with global issues such as transnational crimes, human trafficking, money laundering, and cybersecurity.
Regarding climate change, they agreed that developed countries have the responsibility for realizing their own commitments and helping developing nations to implement their pledges. Hue asked the UK to assist Vietnam with finance, technique, training, and capacity building to deliver on its commitments made at the 26th UN Climate Change Conference (COP26).
The Vietnamese NA supports and stands side by side with the Government to ensure the implementation of the country’s commitments to the international community, he added.
Hoyle highly valued Vietnam’s determination shown at COP26 and said he will persuade the British and European sides to help Vietnam.
At the talks, the two sides applauded their countries’ cooperation at multilateral mechanisms such as the United Nations, the Asia - Europe Meeting (ASEM), and the ASEAN - UK cooperation.
Hue affirmed that Vietnam always supports the UK to enhance ties with ASEAN and is ready to serve as a bridge helping the UK expand cooperation with ASEAN countries.
The host speaker said there are always parliamentarians supporting Vietnam in the British legislature, including those with important roles in the European Parliament, and they are critical links between Vietnam and the European Parliament.
Chairman Hue expressed his delight at the thriving relations between the Vietnamese and British parliaments over the past years, which he said is an important factor helping intensify the Vietnam - UK strategic partnership.
The Vietnamese NA wishes to work closely with the British House of Commons to develop the strategic partnership to a new height, enhance political trust, increase people-to-people exchange, improve all-round cooperation effectiveness, share experience in issuing policies on post-pandemic economic recovery and green growth, and exchange views on international affairs.
To step up bilateral cooperation, the two sides agreed to boost all-level mutual visits, share experience in parliamentary activities, reinforce coordination to monitor and promote the implementation of the Governments’ cooperation deals and strategic cooperation projects, and support the Vietnamese and British Governments, localities, businesses and people to increase exchanges, mutual understanding, and win-win cooperation.
They will also boost consultation, coordination, and mutual support at multilateral parliamentary forums such as the Inter-Parliamentary Union (IPU) and the Asia - Europe Parliamentary Partnership (ASEP).
Talking about international and regional issues, the two leaders held that amid fast, complicated, and unpredictable changes in the international and regional situation, it is necessary to uphold international law, respect independence, sovereignty and territorial integrity, peacefully resolve disputes, stop the use of force in international relations, and prioritize cooperation to cope with emerging challenges such as cybersecurity and transnational crimes.
On this occasion, Chairman Hue invited the host speaker to soon pay a visit to Vietnam, and Hoyle accepted the invitation with pleasure.