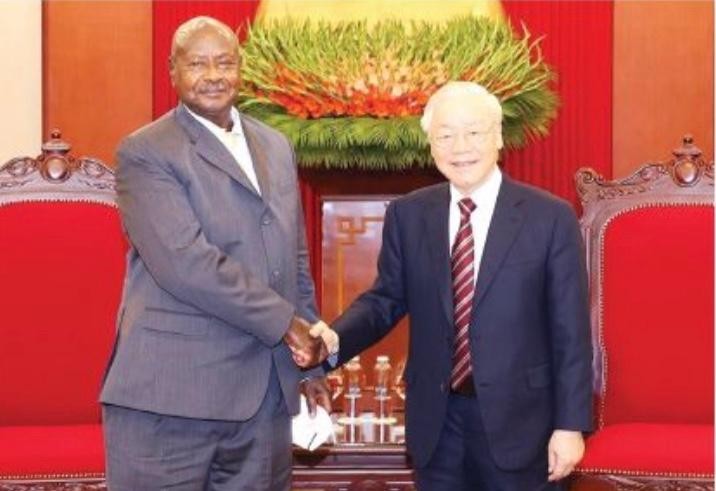 Vietnamese Party General Secretary Nguyen Phu Trong (R) and visiting Ugandan President Yoweri Kaguta Museveni (Photo: VNA)
During their meeting in Hanoi, Trong stressed the significance of the Vietnam visit by Museveni, who is also Chairman of the National Resistance Movement (NRM) Party, saying it will open up a new development period for the ties between the Communist Party of Vietnam (CPV) and the NRM and the two countries, especially in the context of the two countries working towards the 50th anniversary of the bilateral diplomatic ties next year.

Congratulating Uganda on its achievements in national construction and development, the host expressed his belief that under the leadership of the NRM and the President, the country will maintain a peaceful and stable environment for further growth.
Trong briefed the guest on Vietnam’s foreign policy of independence, self-reliance, peace, friendship, cooperation, development, diversification and multilateralization of relations, and being a friend and reliable, responsible partner of the international community.
Vietnam attaches importance to promoting its relations with African nations in general and Uganda in particular, he said, noting that huge space still remains for Vietnam and Uganda to boost their cooperation in all spheres.
The Vietnamese Party leader emphasized major orientations to beef up cooperation in politics, economy and culture between the two countries, and step up their mutual understanding and coordination at international forums.
He also stressed the significance of the political will and policies of the two countries’ leaders to enhancing the bilateral ties.
For his part, the Ugandan President spoke highly of the CPV’s leadership in Vietnam’s past struggle for national independence and reunification, and the present cause of national construction and development.
The leader expressed his wish for stronger cooperation between the two countries.