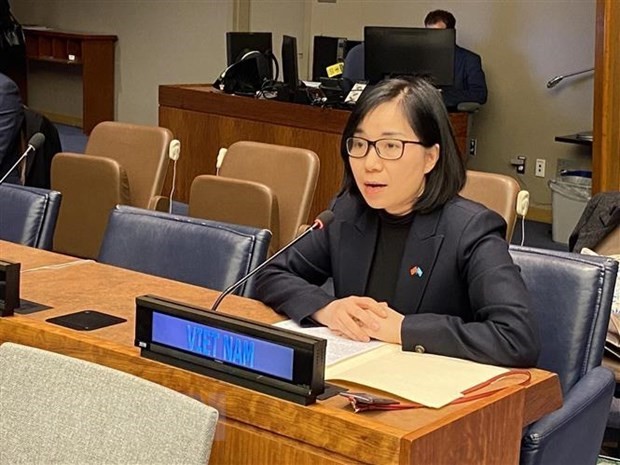 She held that the international community should give high priority to ensuring compliance with international law and the UN Charter. She also underlined the role of multilateralism and multilateral mechanisms with the UN at their center.

To promote a ceasefire, it is necessary to boost compliance with Resolutions 2532 and 2565, and relevant resolutions of the UN Security Council, Tra said, suggesting a framework be set up to effectively monitor ceasefire agreements in conflict-hit regions.

Highlighting Vietnam’s efforts to promote the UN Security Council’s adoption of Resolution 2573 on the protection of critical civilian infrastructure in armed conflicts, the ambassador said this issue as well as ensuring safety for vaccine distribution amid conflicts needs serious efforts.

She also stressed the importance of resolving root causes of conflicts, stepping up peacebuilding, and enhancing long-term resilience to cope with future challenges.

In his message sent to the dialogue, UN Secretary-General Antonio Guterres voiced his concern over continued conflicts in many places around the world and called on the international community to seek new ways to ease tensions, end conflicts, push for new ceasefire agreements, and maintain existing ones.

Participants discussed challenges to and measures for promoting the implementation of the UN Secretary-General’s appeal in the context of the Covid-19 pandemic. They also looked at ways to prevent conflicts and integrate a peacebuilding and development agenda into peace processes in conflict-hit areas.

The dialogue was co-chaired by Malaysia, Bangladesh, Ecuador, Egypt, Jamaica, Japan, Oman, Senegal, Slovenia and Sweden. It saw the presence of UN Assistant Secretary-General Khaled Khiari, President of the International Peace Institute Zeid Ra’ad Al Hussein, Permanent Observer of the International Committee of the Red Cross to the UN Laetitia Courtois, along with representatives of UN member states.