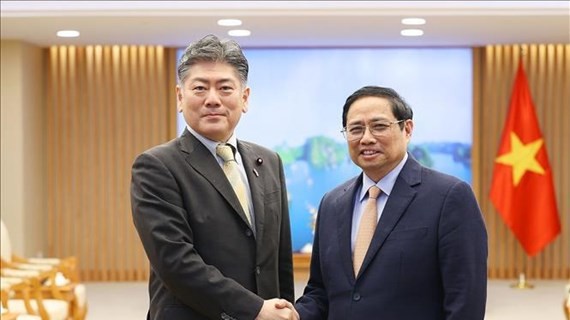 He affirmed that the Government of Vietnam is providing all enabling conditions to strengthen legal and judicial cooperation between the two ministries of justice, which plays a part in stepping up the Vietnam – Japan extensive strategic partnership.

Describing Japan as Vietnam’s long-term, trusted and leading partner which shares many common strategic benefits with Vietnam, PM Chinh said Vietnam backs Japan in playing a role in maintaining peace, stability, cooperation and development in the world and the region.

Japan has remained Vietnam’s largest ODA provider and second biggest destination for Vietnamese guest workers and among the country’s top investors and trade partners, he said, adding that the two countries have seen expansion in collaboration in digital transformation, science and technology, environment, agriculture, personnel training and Covid-19 response.

He suggested the two sides continue taking joint efforts to protect legitimate rights and benefits of Vietnamese nationals living in Japan and vice versa, contributing to bolstering the growing relations between the two countries.

The PM hoped that Japan would prioritize and expand its labor trainee programs for Vietnamese guest workers and help further improve their skills and competency.

The Vietnamese leader expected the two sides to increase cultural and people-to-people exchanges and all-level meetings and coordinate to hold major events in celebration of the 50th founding anniversary of the bilateral diplomatic ties in 2023.

Yoshihisa said he is honored to contribute to expanding the two countries’ relationship based on “sincerity, affection and trust”, as well as increasing the “heart-to-heart” understanding between their leaders and people.

He said Japan will support and share experience with Vietnam in justice, human resources development, law-making and digital transformation; and provide the best conditions for Vietnamese people living in Japan.

The two sides later exchanged views on several regional and global issues of mutual concerns. The Japanese minister confirmed Japan’s support for Vietnam and ASEAN’s stance on settling maritime disputes via peaceful means based on international laws, including the 1982 UN Convention on the Law of the Sea (UNCLOS), and ensuring security, safety and freedom of aviation and navigation at sea.