At the talks with President of the Comoros Azali Assoumani, Minh stated Vietnam attaches importance to relations with African countries, including the Comoros.
He proposed measures to strengthen the nations’ cooperation and requested the Comoros support Vietnam’s bid to join the Human Rights Council in the 2023-2025 term.

Nodding at Minh’s proposal, Azali Assoumani wished that Vietnam shares experiences and enhances collaboration with his nation regarding the development of farming, trade, fishery, and tourism. The President also agreed to promote the early negotiation and signing of some important documents to create a favourable legal basis for the bilateral cooperation. 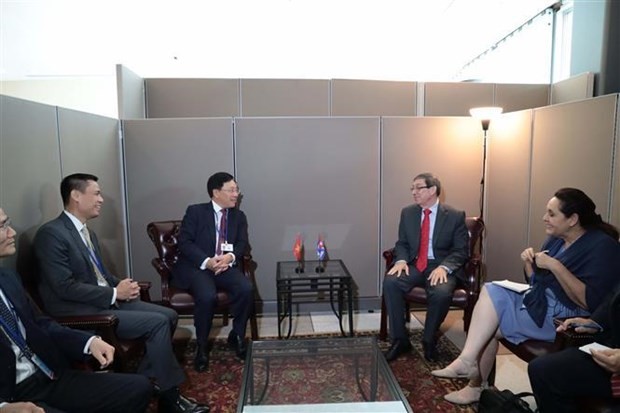 Talking to Cuban Minister of Foreign Affairs Bruno Rodriguez Parrilla, the Vietnamese Deputy PM expressed his delight at the growth of the countries’ special and traditional ties and thanked Cuba for supplying Vietnam with Covid-19 vaccine.

Minh suggested the Vietnamese and Cuban foreign ministries work closely together to prepare for upcoming meetings of the two countries' leaders and a theoretical seminar between the two parties.

He also stressed it is also necessary to increase consultations and close collaboration and support at international organisations and multilateral forums; and seek measures to deepen trade, investment, and cooperation in agriculture, health, science-technology.

B.R.Parrilla affirmed that Cuba always highly value and wishes to foster the special friendship, solidarity and comprehensive cooperation with Vietnam.

He appreciated Vietnam’s assistance for his nation over the past time, particularly its consistent stance calling for the lifting of the embargo against Cuba.

He agreed with suggestions from the Vietnamese side and pledged to further coordinate tightly with Vietnam.

At his meeting with Canadian Minister of Foreign Affairs Melanie Joly, Minh expressed his delight at the countries’ growing relations toward effectiveness and welcomed Canada’s strong commitment to supporting ASEAN’s centrality and concrete efforts to promote the ASEAN-Canada comprehensive partnership.

Joly, for her part, stated Canada considers Vietnam among its leading partners in the region, and wishes to strengthen and expand cooperation with Vietnam on a bilateral basis, at multilateral organisations and forums, and within the framework of the ASEAN-Canada partnership, in contribution to the maintenance of regional and international peace, stability and prosperity.