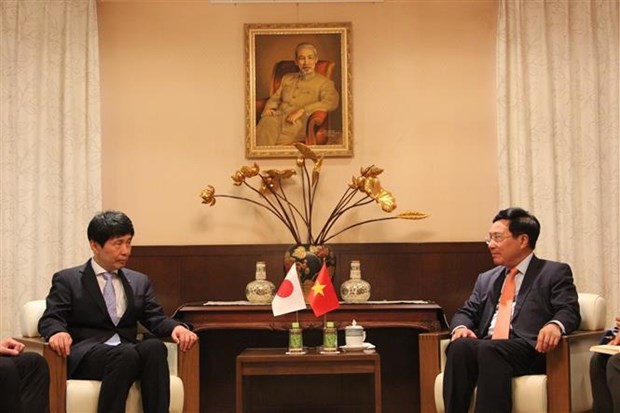 He highly valued efforts by the two prefectures in holding cultural exchange activities with Vietnam, even during the pandemic, contributing to enhancing mutual friendship between people of both countries.

Highlighting that Vietnam has fully opened its tourism for foreign tourists and put Covid-19 under control, the Deputy PM suggested that the administrations of Kanagawa and Gunma take measures to encourage local businesses to invest in Vietnam, and pledged to create optimal conditions for those from the two prefecture as well as investors from Japan in general during their investment process.

For their part, the two governors vowed to work harder to promote economic and cultural exchanges with Vietnam, and showed their hope to receive more interns from Vietnam.

Governor Kuroiwa told Minh about the locality’s plan to resume the Vietnamese Festival in Kanagawa in September and the Kanagawa Festival in Vietnam in November this year. 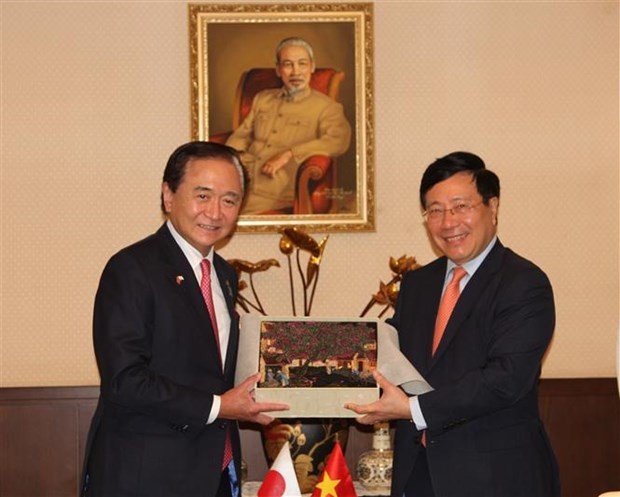 Deputy Prime Minister Pham Binh Minh (R) presents a souvenir to Governor of Kanagawa Prefecture Yuji Kuroiwa (Photo: VNA)
Earlier the same day, Deputy PM Minh worked with staff of the Vietnamese Embassy and representative agencies in Japan. Lauding their efforts in promoting ties between the two countries, Minh underscored the significance of the Vietnam-Japan relationship and its progress in all fields, especially in trade and investment.

Deputy PM Minh informed the participants in Covid-19 situation at home and underlined that the pandemic has been put under good control, and Vietnam has reached high vaccination coverage, enabling the country to boost economic growth in the first five months of this year.

Ambassador Vu Hong Nam briefed the Deputy PM on the situation of the Vietnamese community in Japan.

Deputy PM Minh also had a meeting with the Vietnamese Intellectuals’ Association in Japan and listened to a report on the operations of the association since it was established in 2019, and its plans for 2023 when the two countries celebrate the 50th anniversary of their diplomatic relations.

Deputy PM Minh is scheduled to attend the 27th International Conference on the Future of Asia on May 26. The same day, he will meet with Toshimitsu Motegi, General Secretary of the Liberal Democratic Party (LPD), and Japanese Foreign Minister Yoshimasa Hayashi. He will attend a banquet hosted by PM Kishida Fumio.