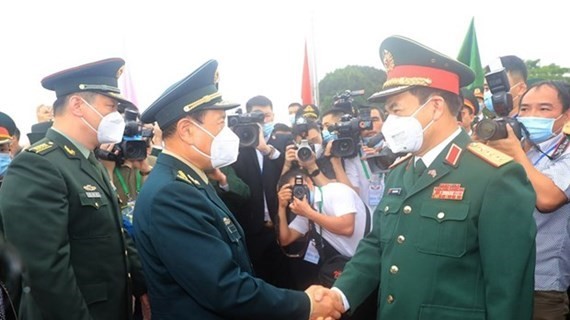 It was meant to foster political trust, friendship, solidarity and cooperation between the border guards, authorities and peoples of the two countries in border areas, contributing to building a borderline of peace, friendship, stability, cooperation and development.

During talks before the welcome ceremony at Dongxing border gate in the morning the same day, both sides affirmed that over the past more than seven decades since the establishment of bilateral diplomatic ties, friendship and cooperation have been a mainstream of ties between the two Parties and nations. Exchange activities have contributed to strengthening Vietnam – China comprehensive strategic cooperative partnership that meets aspirations and interests of the two peoples.
Thet wo countries’ border guards have also promptly discovered and informed illegal entries to each other, thereby helping effectively control COVID-19 infections across the border, creating favourable conditions to maintain border trade.
Giang hailed the Chinese Central Military Commission and Defence Ministry for providing support for the Vietnamese Defence Ministry, including border guards, in terms of medical supplies and anti-pandemic expertise.
He suggested the two defence ministries maintain the event to further boost ties between the two armies, border guards and peoples in border areas, adding that both sides could hold drills to cope with disasters and epidemics across the border.
The Vietnamese minister proposed building and upholding values of friendship works, and assisting poor households in border areas via the provision of livelihood support and scholarships.
The two sides affirmed that the friendship exchange also manifests determination, solidarity and friendship between the two Parties, States and armies. Vietnam and China will do their best to continue maintaining and fostering cooperation and friendship between the two peoples and border guards.
Following the talks, they witnessed the signing of a Memorandum of Understanding on further cooperation in scientific research between the Vietnamese Defence Ministry’s Institute for Military Strategy and the Academy of Military Science of the Chinese People's Liberation Army.