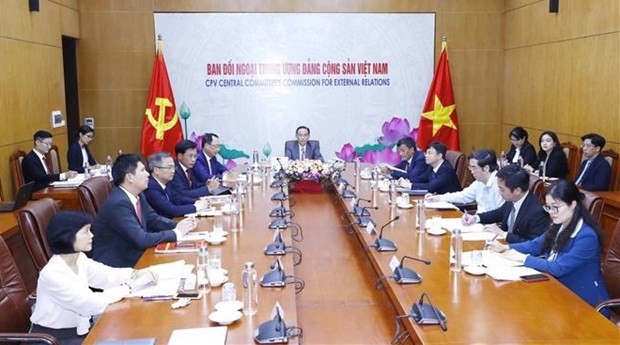 Trung read a letter of congratulations by Party General Secretary Nguyen Phu Trong to the forum, in which the Vietnamese Party leader spoke highly of the CPC’s organisation of the event, regarding this as an opportunity to pay tribute to Karl Marx, Friedrich Engels and Vladimir Ilyich Lenin – great thinkers and eminent revolutionaries of international communist and workers’ movements.
The forum also highlights the great contributions and enduring values of Marxism-Leninism and serves as a platform for the delegates to share experience in applying Marxism-Leninism in each Party and country, the Vietnamese Party leader added.

He used the occasion to congratulate the CPC and China on noted achievements they have recorded in socialism building, including their innovative application of Marxism-Leninism.

In Vietnam, President Ho Chi Minh’s Thought was also formed as a result of the innovative application of Marxism-Leninism, lessons drawn from international communist and workers’ movements, the upholding and development of national traditional values and the absorption of the quintessence of human culture, Trong noted.

Over the past more than 90 years, Marxism-Leninism and the Ho Chi Minh Thought have been the ideological foundation and the lodestar for the CPV, he said, stressing that Marxism-Leninism will continue to be a torch that lights up the path for Vietnam’s revolution in the new era.

On behalf of the Vietnamese Party, State and people, Trong thanked Marxist political parties and progressive forces in the world, including the Chinese Party and people, for their support for Vietnam through different periods.

The CPV always attaches importance to and stands ready to expand cooperation with the Marxist parties and progressive forces during struggles for common peace, friendship, democracy and prosperity, and the constant development of Marxism-Leninism, he affirmed.

Within the framework of the forum, Nguyen Van Thanh, Vice Chairman of the Central Theory Council, delivered a speech highlighting the significance of Marxism-Leninism and Vietnam’s innovative application and development of Marxism-Leninism.

Party General Secretary and President of China Xi Jinping also sent a congratulatory message to the forum, saying that the CPC is willing to step up exchanges with the Marxist political parties and work together to diversify and promote Marxism-Leninism.

The forum brought together about 300 representatives from 100 Marxist political parties of 70 countries worldwide.