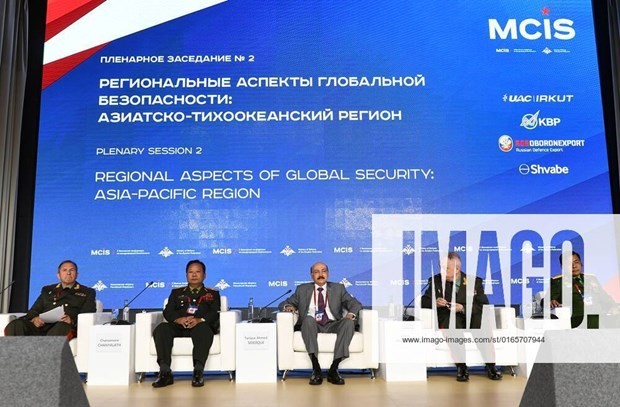 Defence Minister General Phan Van Giang also sent a pre-recorded speech to the second session of the conference, calling the MCIS an important multilateral forum for countries to exchange views on strategic issues directly relating to regional and international security, thus helping promote dialogues and enhance cooperation between countries, for peace, stability, cooperation and development in the region and the world as well.
Pointing to uncertainties in the region which have impacted regional security architecture, Giang said there have been ASEAN-led mechanisms and forums like the ASEAN Regional Forum (ARF), the East Asia Summit (EAS), the ASEAN Defence Ministers’ Meeting (ADMM), the ADMM Plus and the ASEAN Maritime Forum.

The mechanisms and forums, together with other multilateral forums such as the Shangri-La Dialogue, the Beijing Xiangshan Forum and the MCIS have promoted mutual understanding and dialogues, towards cooperation in handling conflicts and differences through peaceful measures, the minister said.

He suggested countries build political trust to deal with regional security challenges which, however, requires time, patience and regular efforts.

Notably, all activities aiming to build political trust should match the principles of the United Nations Charter, international law and regional commitments, the minister continued.

Giang affirmed that Vietnam has made efforts, together with other countries in and outside the region, to devise and implement cooperation mechanisms and fully participate in regional multilateral forums.

Vietnam will further contribute to multilateral cooperation mechanisms and work to promote peace and reconciliation and prevent conflicts, he pledged.

Regarding the East Sea issue, he emphasised that Vietnam persistently pursues the principle of settling disputes and differences by peaceful measures on the basis of respecting independence, sovereignty and legitimate rights of the countries and in line with international law, including the 1982 United Nations Convention on the Law of the Sea (1982 UNCLOS).

Vietnam commits to seriously implementing the Declaration on the Conduct of Parties in the East Sea (DOC) and hopes for an effective, substantial and more legally-binding Code of Conduct (COC), he said.

MCIS-10 brought together 700 delegates from 70 countries and six international organisations.