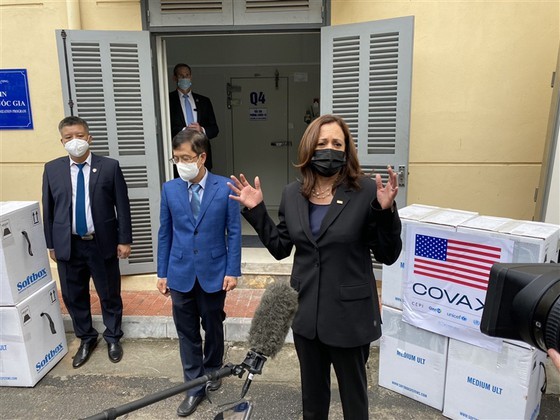 US Vice President Kamala Harris speaks at the receiving event of 1 million doses of Pfizer vaccine at the National Institute of Hygiene and Epidemiology in Hanoi. (Photo: SGGP)
“We've had an enduring commitment to this relationship, because it matters to the people, to the security and to the prosperity of the American people. And we believe in the people of Vietnam,” she said.
Lauding achievements in the bilateral ties since the normalisation, Harris said the two countries are strengthening their partnership and will take on the traditional issues and challenges, as well as those of the future.
Saying that she knows the Covid-19 surge is the number one issue for the Vietnamese people right now, the Vice President informed that 1 million doses of Pfizer vaccine had arrived in Vietnam on August 26 noon, raising the total vaccine doses the US has shared with Vietnam to six million.
The US Vice President recalled Vietnam’s support to the US during the earliest days of the pandemic, and stressed that “we now are here for you in this moment of need.” She also highlighted the opening of a new CDC Southeast Asia Regional Office in Hanoi.
“We do intend and hope that the people of Vietnam know that we will be with you as you battle this surge,” Harris said.
According to the Vice President, even in the midst of the pandemic, the two countries will continue to partner together to strengthen their economic ties. She mentioned bilateral collaboration in digital economy, ethnic minority and women affairs, smart agriculture and climate change.
Emphasising the significance of climate change response, Harris cited a report issued by the US which said by 2030, the temperatures would rise as much as 2.7 degrees Fahrenheit. 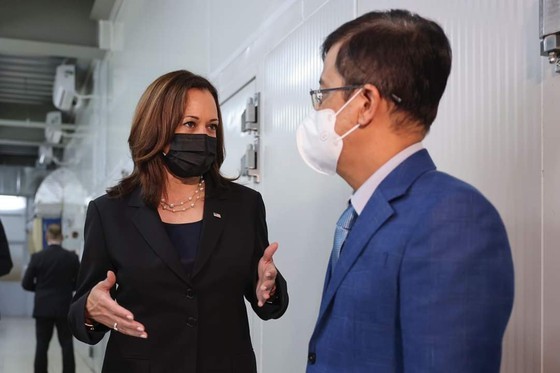 US Vice President Kamala Harris talks with Prof. Dang Duc Anh, Director of the National Institute of Hygiene and Epidemiology . (Photo: SGGP)
“The crisis then is urgent,” she said. “We are proud to stand with Vietnam and other partners and allies around the globe in meeting this moment.”
The US Vice President reaffirmed the US’s commitment to a free and open Indo-Pacific, and said the US will continue its high-level security cooperation and support of a strong, prosperous, and independent Vietnam.
She said the US will continue to work with Vietnam to push back against threats to freedom of navigation and the rule-based international order.
Vietnam has “particular importance and significance to the United State”, she said, noting that the US intends to strengthen its participation and partnership with its partners and allies, and further and strengthen shared interests in a way that is collaborative, meeting the challenges of the moment and the challenges of tomorrow together.
The Vice President said throughout this trip and in many meetings with Vietnamese government officials and business leaders, she was reminded about the potential in this region. She expressed her belief that enhancing the cooperation is significant to both peoples.
She said a lease for 99 years to establish the US Embassy in Hanoi was signed during the trip, which is evidence of the US’s enduring commitment to the partnership with Vietnam.
Asked about the US’s specific policies to develop the Vietnam-US ties, Harris said the relationship is really built on the foundation of understanding, with mutual desire to strengthen both nations’ security and economic standing, and their ability to meet the challenges ahead.
Earlier the same day, Harris visited the National Institute of Hygiene and Epidemiology to witness the hand-over of 270,000 out of the 1 million doses of vaccine that the US provides for Vietnam during the visit of the US Vice President.