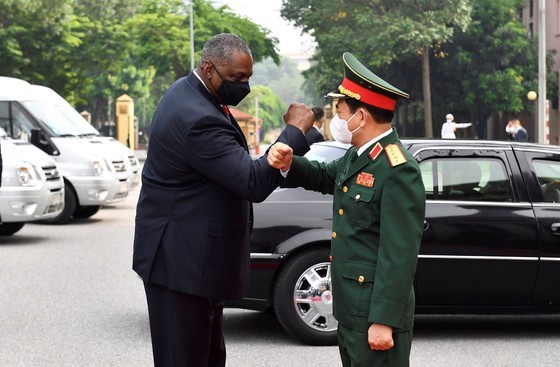 Vietnamese Minister of National Defence General Phan Van Giang (R) and US Secretary of Defense Lloyd Austin
After an official welcome ceremony chaired by Gen. Giang on July 29, the two ministers held talks, during which they appreciated the results of bilateral defense cooperation, and said that the cooperation has achieved practical results, that conform to the comprehensive partnership between the two countries, especially in overcoming war consequences, addressing non-traditional security challenges, supporting Vietnam in joining the United Nations peacekeeping missions, and improving the law enforcement at sea and military medicine. 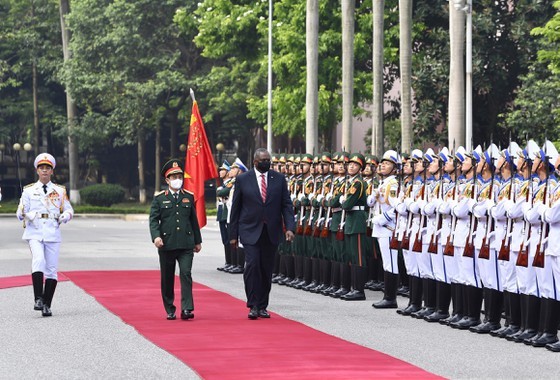 Defense Minister General Phan Van Giang and US Secretary of Defence Lloyd Austin inspect the guard of honour of the Vietnam People's Army at the welcome ceremony in Hanoi (Photo: SGGP)
The US official took the occasion to provide equipment to serve Vietnam’s efforts to combat the pandemic.
They agreed to continue promoting collaboration following the Memorandum of Understanding on Promoting Defense Cooperation signed in 2011 and the Joint Vision Statement on Defense Relations signed in 2015, with priority given to the settlement of war consequences, the improvement of law enforcement at sea, military medicine collaboration in the fight against the COVID-19 pandemic and training.

Defense Minister General Phan Van Giang and US Secretary of Defence Lloyd Austin and delegates of the two countries (Photo: SGGP)
The US Secretary of Defense agreed to step up the implementation of the dioxin decontamination project at Bien Hoa airport and other humanitarian projects in Vietnam.
At the talks, the two sides also exchanged views on international and regional issues of mutual concern, especially traditional and non-traditional security challenges that directly affect the region. They affirmed ASEAN’s central role in enhancing cooperation within the framework of the ASEAN Defense Ministers’ Meeting Plus (ADMM ) in order to maintain an environment of peace and stability in the region and the world. 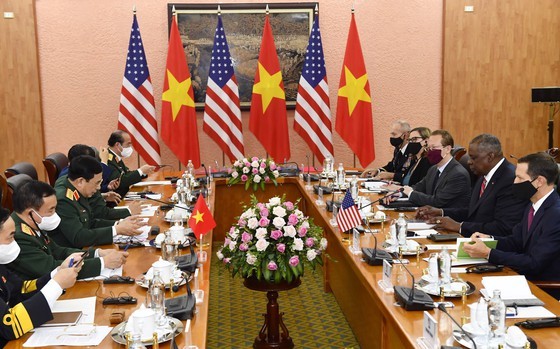 Defense Minister General Phan Van Giang hold talks with US Secretary of Defense Lloyd Austin hold talks in Hanoi (Photo: SGGP)
They shared views on the importance of respecting the legitimate rights and interests of coastal states, peacefully solving disputes as well as maintaining peace stability, safety, order and freedom of aviation and navigation at seas and oceans in accordance with international law and the 1982 United Nations Convention on the Law of the Sea (UNCLOS 1982).
The two ministers then witnessed the signing of a Memorandum of Understanding on cooperation in searching, gathering and identifying the remains of Vietnamese martyrs.

Defense Minister General Phan Van Giang speaks at the event. (Photo: SGGP)
The US Defense Secretary is scheduled to pay courtesy visits to State President Nguyen Xuan Phuc and Prime Minister Pham Minh Chinh.
The visit will contribute to strengthening friendship and trust between the people and armies of the two countries, and implementing defense cooperation contents signed between the two defense ministries and agreements reached by the two nations’ high-ranking leaders, thus contributing to the framework of the Vietnam-US comprehensive partnership. 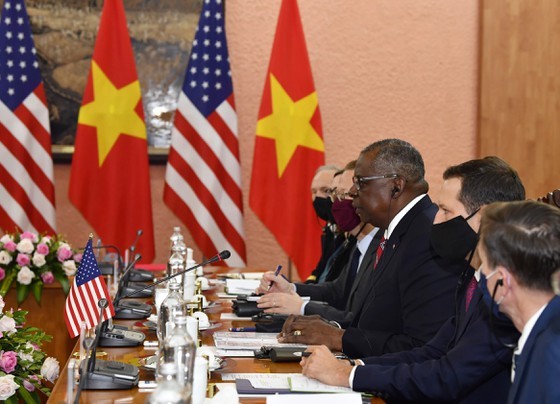