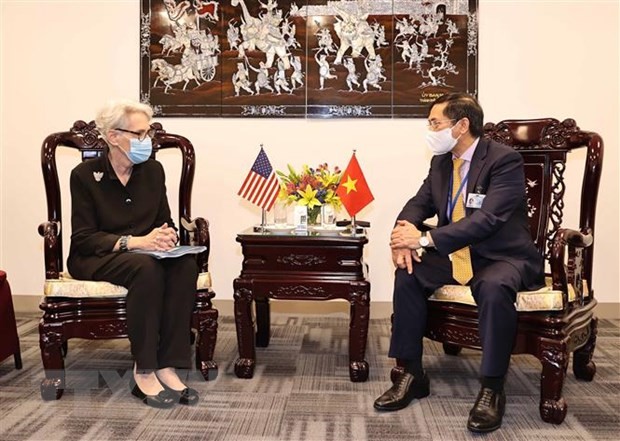 Vietnamese Minister of Foreign Affairs Bui Thanh Son (right) and US Deputy Secretary of State Wendy Sherman (Photo: VNA)
Speaking at a reception for US Deputy Secretary of State Wendy Sherman in Hanoi on June 13, Son thanked the US administration and Congress, including the Department of State, for their warm welcome for the Vietnamese delegation during their trip to the US last month for the ASEAN-US Special Summit and visits to the
The minister also congratulated the US on its successful organisation of the summit, which, he said, demonstrates the country’s long-term commitments to enhancing cooperation with ASEAN and supporting the bloc’s centrality, and contributing to peace, stability, cooperation and development in the region.
For her part, Sherman also affirmed the importance the US attaches to the comprehensive partnership, saying the US consistently backs a strong and prosperous Vietnam and wishes to advance the relationship at a suitable time.
Reviewing the US trip by Prime Minister Pham Minh Chinh last month, she said it has created momentum for the bilateral ties, especially in economy, trade and investment.
The US will continue its intensive, extensive and responsible cooperation with Asia-Pacific and Indian Ocean, and strengthen collaboration with ASEAN member countries, she pledged.
The two sides compared notes on specific measures to step up the bilateral cooperation in such areas as high-level delegation exchange, pandemic prevention and control, post-pandemic socio-economic recovery, investment, trade, war consequence settlement and the construction of representative offices of the two countries.
They also exchanged views on regional and international issues of shared concern like connectivity initiatives in the Indo-Asia-Pacific region, the East Sea issue, sustainable development, educational cooperation in the Mekong sub-region, and the Russia-Ukraine conflict.
The same day, Deputy Minister of Foreign Affairs Ha Kim Ngoc had a meeting with Sherman, during which the host suggested the US Deputy Secretary coordinate with the Vietnamese side to accelerate the visit to Vietnam by President Joe Biden this year.
Ngoc called for the US’s sharing of information about regional initiatives and its further support to Vietnam in the settlement of war consequences and clean energy transition.
Sherman spoke highly of Vietnam’s participation in the launch of the discussion on Indo-Pacific economic framework, which offers an opportunity for Vietnam and other regional countries to contribute to the formation of common standards and rules for potential cooperation fields like digital economy, clean energy transition and economic resilience improvement.
The US and countries are willing to help Vietnam with resources, finance and technology to fulfill its commitments at the United Nations Climate Change Conference (COP26) and address war consequences, she continued.
Sherman also announced the US’s additional funding of 19 million USD for bomb and mine clearance in Vietnam.
Regarding regional and international issues of shared concern, the two sides emphasised the significance of observing basic principles of the United Nations Charter, respecting independence, sovereignty and territorial integrity of countries, ensuring security, safety and freedom of navigation and aviation, and peacefully settling disputes in line with international law, including the 1982 United Nations Convention on the Law of the Sea (1982 UNCLOS).
They consented to continue their close coordination at regional cooperation frameworks, especially ASEAN mechanisms and Mekong sub-regional cooperation.
During her stay in Vietnam from June 10-13, Sherman paid a courtesy visit to Secretary of the Ho Chi Minh City Party Committee Nguyen Van Nen, and had meetings with head of the Party Central Committee’s Commission for External Relations Le Hoai Trung, and Deputy Minister of National Defence Hoang Xuan Chien.