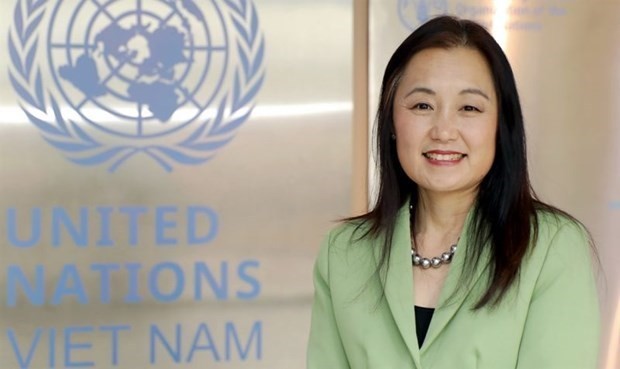 The United Nations Population Fund (UNFPA) Representative in Vietnam Naomi Kitahara (Photo: UNFPA)
Speaking with the press on the sidelines of the launch of a new project for Vietnam in Hanoi on May 5, Naomi suggested the country focus on special, underprivileged groups like ethnic minorities as the maternal mortality ratio among them is two to three times higher than the national average.
The UNFPA Representative also pointed out unintended pregnancy among young adults, and held that it is time for Vietnam to pay more attention to the vulnerable populations so that the country can firmly step towards sustainable development goals (SDGs).
The above-said project, VNM10P04, aims support Vietnamese agencies in producing and utilising quality population data for the formulation and implementation of socio-economic development policies, strategies, and programs.
Launched by the General Statistics Office (GSO) and the UNFPA, it is also meant to help with the monitoring of the realisation of the SDGs in the country.
The project, to run from now to 2026 at a total cost of US$1.9 million, will assist Vietnamese agencies in applying new technologies and communication platforms in the collection, analysis, dissemination, and use of quality population data in order to ensure evidence-based policies, strategies, and programmes for the SGD achievement by 2030.
In this regard, Naomi said although Vietnam has recorded various socio-economic achievements, the country still needs quality data to have a closer look on the present situation and help policy-makers devise better plans to bring the Vietnamese economy to the pre-pandemic level.
Also on May 5, the UNFPA revealed the key findings in its recently released “State of World Population 2022” report, titled "Understanding the Unseen: Taking Action to End the Neglected Problem of Unintended Pregnancy".
According to the UNFPA Representative, the report pointed out the crisis of unintended pregnancy in Vietnam and globally, and that the Covid-19 pandemic and other issues have worsened the situation.
She suggested the UNFPA and Vietnamese competent agencies join hands to soon deal with the problem.