Illustrative image (Photo: VNA)
The talk show was held by the Party Central Committee’s Information and Education Commission and the National Assembly Television on June 18 on the occasion of 40 years since UNCLOS was opened for signature and 10 years since the promulgation of Vietnam’s Law of the Sea.
Ambassador Nguyen Hong Thao, member of the UN International Law Commission for 2023 - 2027, said UNCLOS, opened for signature on December 10, 1982, is the “constitution of the oceans” that comprises many articles covering all fields of international maritime law. It created the foundation for establishing a new international order at sea and balancing interests of all developed and developing countries.
This is the first convention to identify all sea areas in the world, he noted, adding that it also regulates all sea-related activities, including maritime scientific research and under-sea cable installation. 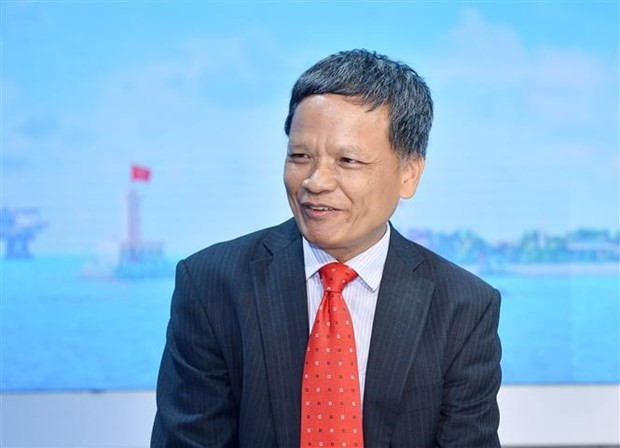 Ambassador Nguyen Hong Thao, member of the UN International Law Commission for 2023 - 2027, speaks at the talk show. (Photo: VNA)
In particular, the convention also stipulates the mechanism for resolving sea-related disputes, Thao said.
Dr. Tran Cong Truc, former head of the Government’s boundary committee, said the convention opened up a new legal corridor for countries to base themselves on to protect and manage their rights and legitimate interests in the seas and oceans.
Talking via videoconferencing, Prof. Carl Thayer, a leading researcher on UNCLOS and international maritime law from Australia’s University of New South Wales, said the feature that can be found only in UNCLOS is that this convention sets up a binding mechanism for settling disputes. If two parties are involved in a dispute, they can refer to UNCLOS to settle.
Notably, it is a “package deal” which means once signing the convention, a party must comply with all regulations, according to Thayer.
Ambassador Dang Dinh Quy, former Permanent Representative of Vietnam to the UN, said more than ever, the international community needs to stay steadfast in the maintenance of the established legal regulations on the oceans like UNCLOS.
To guarantee international peace and security at sea, it is a must to adhere to UNCLOS, which is playing an increasingly important role in maintaining peace and security at sea and sustainably exploiting the seas for the sake of each country and all, he stressed.
Boasting an over-3,260km coastline, 4,000 islands (including Hoang Sa and Truong Sa archipelagos), 28 coastal localities, along with many sea-related interests, Vietnam actively participated in the UNCLOS drafting process.
Thao said after UNCLOS was adopted, Vietnam was one of the 107 first states to sign the convention and quickly carried out the ratification. With the National Assembly’s ratification on June 23, 1994, Vietnam clearly showed its will to exercise the rights within permissible limitations of UNCLOS, with other states’ freedom rights taken into consideration.
Regarding Vietnam’s Law of the Sea, participants affirmed that the UNCLOS membership requires the country to issue a particular and overall law of the sea. That law, on the basis of UNCLOS and international law, was approved by the parliament on June 21, 2012 and took effect on January 1, 2013.
This was an important milestone in the development of Vietnam’s legal system in general and the regulations on maritime issues in particular, they added.