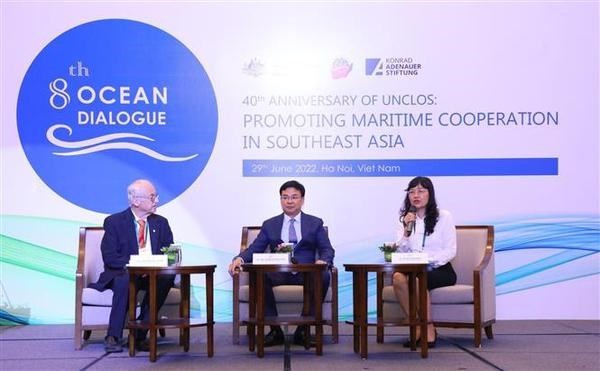 Participants at the dialogue (Photo: VNA)
The 8th Ocean Dialogue took place in Hanoi on June 29 under the theme “40th Anniversary of UNCLOS: Promoting maritime cooperation in Southeast Asia”, drawing more than 150 direct and 100 online participants, including 15 speakers from 14 countries and territories, and representatives from the UN.

Addressing the event, Deputy Foreign Minister Pham Quang Hieu underlined that the passing of the 1982 United Nations Convention on the Law of the Sea (UNCLOS) 40 years ago was a historical milestone in the development of international law, becoming the first comprehensive legal framework and a “constitution” of the sea.
The convention has proved its universal values, he said, adding that to date, it continues to play a fundamental role in the development of international law of the sea, promoting peace, security, cooperation among nations, and the sustainable development of the oceans and seas.

Hieu affirmed that over the past 40 years, the legal order set up following the UNCLOS has greatly contributed to maintaining peace and international stability. The peaceful settlement of disputes at sea in line with international law, therefore, has been promoted.

In the face of increasing maritime challenges, the international community should uphold the rule of law and comply in good faith with its legal obligations under the convention, especially in making claims and conducting legal proceedings at sea. States should promote cooperation at the international and regional levels for the conservation and sustainable use of seas and oceans, while ensuring freedom of navigation and lawful navigational activities, he stressed. 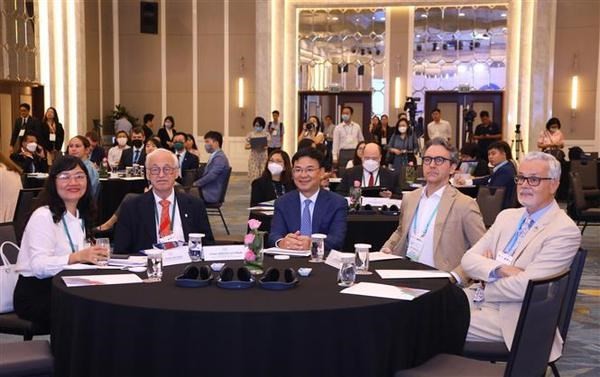 The dialogue draws more than 150 direct and 100 online participants. (Photo: VNA)
For the region, Hieu underlined the need to apply universal values of the UNCLOS to promote cooperation on the foundation of respect for legitimate rights and obligation of coastal states as well as landlocked countries, and among the members and non-members of the UNCLOS to maintain peace, stability, maritime and aviation security and safety and the sustainable management of the East Sea.

To this end, states should respect international law, including the UNLCLOS, while enhancing trust and exercising self-restraint and refraining from activities that may further complicate the situation or escalate tensions in the East Sea, and at the same time applying the convention in determining maritime claims and resolving maritime disputes through peaceful measures.

Rüdiger Wolfrum, former Justice of the International Tribunal for the Law of the Sea, underscored the important role of the convention to the development of international law and the promotion of peace, security, and cooperation among countries as well as the sustainable development of the sea and ocean.

He stressed that the UNCLOS should be applied comprehensively, not separately but linked with the dispute settlement mechanisms and all legal provisions of UNCLOS and international law, emphasising the need for the convention to be further improved to meet the requirements of the new situation in the coming time.