Britain’s international trade secretary has called for the world to “get tough with China” as part of a shake-up of the global trading regime which she claims is “stuck in the 1990s”. 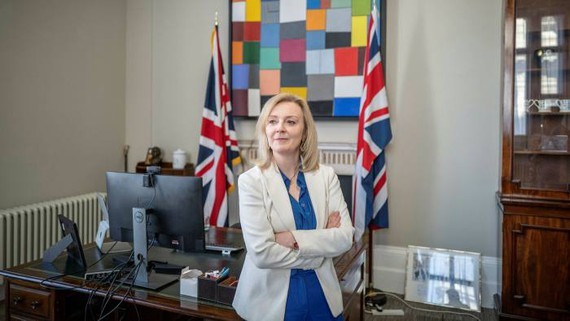 Liz Truss: ‘It is ludicrous [China] is still self-designating as a developing country — and those rules need to change’ © Charlie Bibby/FT

Liz Truss will on Wednesday urge the US and other G7 countries to work to revive the World Trade Organization, which has been caught in the crossfire between Washington and Beijing.
Speaking ahead of a virtual meeting of G7 trade ministers on Wednesday — the UK is the current chair of the group of advanced economies — Truss urged the US to put its weight behind the daunting task of reforming the WTO.
But she argued that any reform had to include a tough approach to Beijing; former US president Donald Trump said the WTO gave special treatment to China, because of its official designation as a “developing country”.
“The WTO was established when China was 10 per cent the size of the US economy,” she told the Financial Times in an interview. “It is ludicrous that it is still self-designating as a developing country — and those rules need to change.”
The WTO has been immobilised by the trade war between the US and China. Its Appellate Body, a court of global trade, was disabled after Trump blocked the appointments of new judges.
Katherine Tai, US trade representative, is expected to review that decision and Truss said she was encouraged that the Biden administration wanted to work “with the multilateral system.”
“It’s one of the issues we need to address,” Truss said. “But it will take all sides to compromise to get to a solution. But there has to be a binding dispute resolution process.” 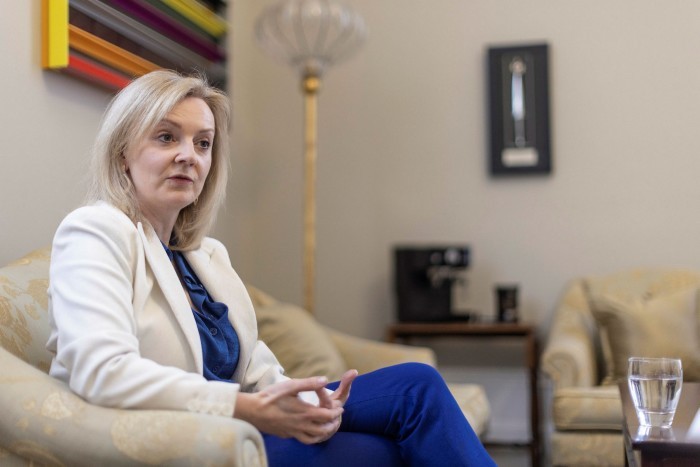 Liz Truss has tried to position post-Brexit Britain as a champion of free trade © Charlie Bibby/FT
She insisted that China itself had an interest in trade rules that people could believe in, adding: “If the WTO doesn’t reform, the reality is that countries will find alternative mechanisms for developing trade.”
She added: “This is the time to get tough on China and their behaviour in the global trading system, but also modernise the WTO. In many ways it’s stuck in the 1990s.”
“It doesn’t have strong rules on digital and data trade, which is getting increasingly important, and is greatly important during Covid.” She said new WTO director-general Ngozi Okonjo-Iweala was “dynamic and effective” and needed support.
Liam Fox, a former international trade secretary, also advocated WTO reform, but proposing change has proved easier for UK ministers than securing it, especially in the face of Chinese opposition.
Truss has tried to position post-Brexit Britain as a champion of free trade, even though the act of leaving the EU left what she called “additional processes” at the border.
She stressed the UK wanted a “positive trading relationship with the EU”, but the recent threat of a ban on vaccine exports to Britain by the European Commission had soured relations.
Truss said the answer to some of the problems thrown up by Covid-19 was for countries to build up resilience of supply by working with “partners we can trust to make sure we’ve got those essential supplies”.
Asked whether she trusted the EU, Truss evaded the question. “Well, the EU are a close partner who share our belief in democracy and enterprise. I’m pleased we are now in talks with the EU about resolving the issues over vaccine supply.”
The Treasury has calculated that Brexit could cost the UK almost 5 per cent of gross domestic product growth over the next 15 years and there are plenty in the finance ministry who claim that any number of trade deals with more distant countries will not compensate for that blow.
Truss, with her free-trading zeal and embrace of Brexit, recently topped a poll of Conservative party members as their favourite cabinet minister. “Freed from the more cautious approach of the EU, I think we can do things differently,” she said.
Truss declined to say when global trade deals would offset the loss of European trade after Brexit, but said that the big opportunities for growth were on the other side of the world.
She said she hoped Britain could secure a deal with the 11-nation CPTPP Pacific trade group “in months rather than years” and that India was “a strong prospect for a future trade deal”. Boris Johnson, the prime minister, travels to India next month.
Nor has she given up hope of a trade deal with the US, in spite of the fact that President Joe Biden has made it clear that trade deals are not a priority.
Truss saw no contradiction in her condemnation of the “absolutely appalling” actions of China in Xinjiang and the fact that Britain’s new foreign policy has committed to seeking a “deep” trade and investment relationship with Beijing.
“We’re not negotiating a trade deal with China — what do is we trade with China in non-strategic areas,” she said. “Of course we trade with China, the US trades with China.”
Financial Times