In his meeting with Tan Chuan-jin, Mr. Hue affirmed that Vietnam treasures and wishes to further develop its strategic partnership with Singapore.

The two countries’ resumption of high-level delegation exchanges after the Covid-19 pandemic has contributed to creating new motivation for bilateral cooperation and post-pandemic socio-economic recovery, he added.

To celebrate the 50th anniversary of the establishment of bilateral diplomatic ties and the 10th anniversary of the strategic partnership, the two sides agreed to maintain the exchange of high-ranking and all-level delegations in all channels, organise parliamentary cooperation activities, and expand collaboration in digital and green economy. 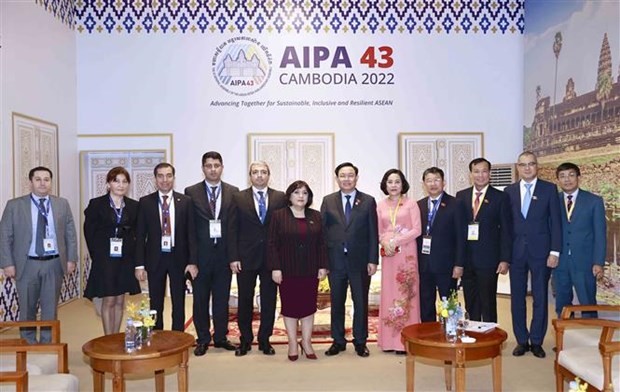 Receiving Sahiba Gafarova, Mr. Hue expressed his hope that they will have more meetings and contacts bilaterally and on the sidelines of regional and international inter-parliamentary forums, given that this is the first-ever meeting of the top leaders of the two countries’ NAs.

Vietnam always attaches importance to its relations with traditional friends, including Azerbaijan, and appreciates the country’s great and precious support for Vietnam’s past struggle for national independence as well as its present nation building and development cause.

He expressed his hope to boost cooperation between the two NAs to make it one of the important pillars in the bilateral relations.

Sahiba Gafarova said she is delighted to meet her Vietnamese counterpart in the context of the 30th anniversary of the establishment of bilateral diplomatic ties, considering it a chance to discuss measures to strengthen the traditional friendship. 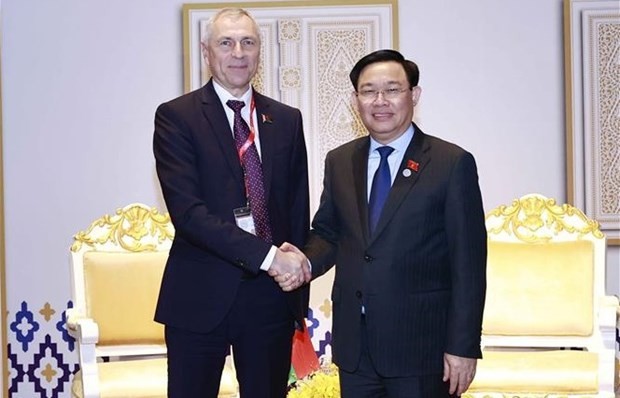 During  Mr. Hue’s meeting with Valeriy Vatslavovich Mitskevich, he affirmed Vietnam always treasures its relations with traditional friends, including Belarus.

To deepen the bilateral cooperation, the two sides agreed to intensify cooperation in economics, trade, investment, tourism and people-to-people exchanges; and consider parliamentary collaboration an important channel in the Vietnam-Belarus relations.

Valeriy Vatslavovich Mitskevich took the occasion to congratulate Vietnam on its election to the United Nations Human Rights Council.