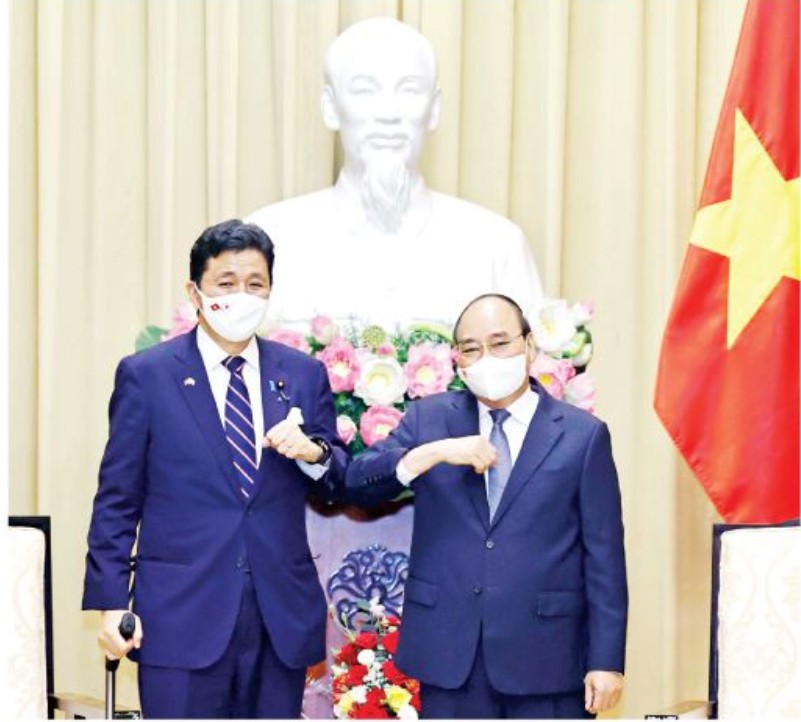 Prime Minister Pham Minh Chinh (R) receives Japanese Defence Minister Kishi Nobuo (Photo: VNA)
The leader spoke highly of the outcomes of the talks between the guest and his host, Defence Minister Phan Van Giang, saying they helped deepen relations between the two countries and contribute to peace, stability, cooperation and development of each country, the region and the world over.

Vietnam will create every favourable condition for the further boosting of the cooperation in the field of national defence between the two countries, he stressed and spoke highly of Japan’s assistance to countries affected by the pandemic, including Vietnam. The leader also thanked the Japanese government for providing Vietnam with over 3 million vaccine doses and asked it to continue with the work in the time to come.

President Phuc welcomed and supported Japan’s active contributions to the maintenance of peace, stability, security and development of the region and the world over, and spoke highly of its stance on ensuring security, safety and freedom of navigation and aviation in the East Sea; and settling disputes and differences by peaceful measures on the basis of respect to international law, especially the United Nations Convention on the Law of the Sea in 1982 as well as the Declaration on the Conducts of Parties in the East Sea (DOC).

The Japanese guest affirmed Vietnam is a partner of the top importance of Japan in the region, briefed President Phuc on the outcomes of his talks with his counterpart, and expressed his hope that the two countries will further strengthen their national defence cooperation. Japan will continue actively implementing its cooperation with Vietnam in easing the war aftermaths, search and rescue activities, and sea security, he stressed.

The Japanese minister highlighted his country’s pledge to continue cooperating with Vietnam to control the pandemic.