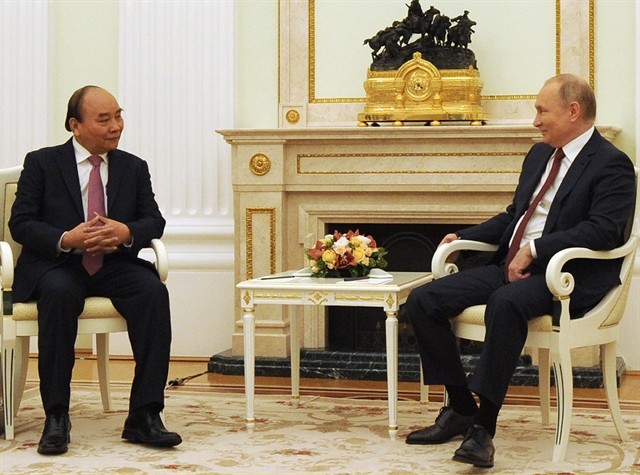 President Phuc expressed his pleasure visiting Russia again and meeting President Putin, a great and close friend of the Vietnamese people, maintaining that Vietnam  always attaches importance to the comprehensive strategic partnership with Russia, and wishes to further enhance cooperation between the two countries in all fields, for the sake of mutual benefits.
The State President also conveyed greetings and best wishes from Party General Secretary Nguyen Phu Trong and other leaders of the Party and State of Vietnam to President Putin.
In the atmosphere of trust, sincerity and openness that has come to characterise the traditional friendship between Vietnam and Russia, the two presidents discussed and concurred on many important directions and measures to open up a new phase of cooperation with a view towards practicality in the future, with a vision to 2030.
The two heads of states also discussed many international and regional issues of mutual concern, as well as cooperation between the two countries in the international arena in order to contribute to peace, stability and prosperity.
President Phuc and President Putin said the Vietnam-Russia political-diplomatic ties enjoy a high level of strategic trust, with high-level exchanges maintained in both multilateral and bilateral channels, despite the Covid-19 pandemic. The two sides agreed to promote further exchanges, especially people-to-people exchanges and reopening of direct flights once the pandemic is brought under control.
The two heads of state highly rated bilateral defence and security cooperation, with many accomplishments that have helped to deepen the political trust between the two countries.
They also stressed their determination to make economic cooperation an important pillar in Vietnam-Russia relations.
Economic and trade cooperation between the two countries has also been developed dynamically in recent years. Two-way trade reached US$4.85 billion in 2020, up 9 percent year-on-year. It hit US$3.6 billion in the first nine months of this year, up 5 percent against the same period of 2020.
As of April 2021, Russia had ranked 25th among countries and territories investing in Vietnam with 144 projects worth $944 million. Meanwhile, Vietnam had invested in over 20 projects worth nearly $3 billion in Russia.
Although trade and investment cooperation has maintained positive growth, there is still a lot of potential and room for development when the two economies have "complementary" goods and services, rather than "competing."
They agreed to continue effectively implementing the Free Trade Agreement between Vietnam and the Eurasian Economic Union, as well as create more favourable conditions for two-way trade and investment, in order to create breakthroughs in this important aspect of cooperation.
The Vietnamese and Russian leaders affirmed that energy and oil and gas continue to be one of the main pillars of the Vietnam-Russia Comprehensive Strategic Partnership; agreed to continue maintaining and expanding work by Russian oil and gas businesses in the continental shelf area of Vietnam and by Vietnamese oil and gas businesses in Russia in accordance with international law, including the 1982 United Nations Convention on the Law of the Sea.
They also welcomed and pledged to facilitate cooperation in the fields of liquefied natural gas, thermal power - gas, renewable energy, as well as accelerate the project to build the Research Center of Nuclear Science and Technology in Vietnam, considering this one of the key projects between the two countries.
Cooperation in traditional fields such as education-training, science-technology, culture, tourism and information-technology were also highly valued by the two countries' leaders.
President Phuc and President Putin noted with appreciation the cooperation between the two countries in Covid-19 prevention and control, including practical acts such as sharing vaccines and medical supplies.
Vietnamese President Phuc thanked President Putin, as well as Russian authorities, for always paying attention to and creating favourable conditions for Vietnamese citizens in Russia to live, study, and do business in Russia, especially giving them proper medical care during the Covid-19 pandemic.
In discussions of regional and global affairs, President Phuc welcomed and highly appreciated Russia's major power role and its increasingly elevated international profile in the region, and underlined Vietnam's willingness to connect Russia and ASEAN and other Asia-Pacific nations.
The two leaders also discussed coordination in the maintenance of peace, stability, security, safety, and freedom of navigation and overflight in the Asia-Pacific, including the South China Sea, in accordance with international law, including the 1982 UNCLOS.
After the talks, President Phuc and President Putin issued a joint statement on the Vision of the Comprehensive Strategic Partnership between Vietnam and Russia to 2030, which is expected to guide the trusted and profound cooperation between the two countries, meeting the long-term interests of the two countries and peoples, contributing to peace, security and sustainable development in the region and around the world.
During the State banquet, the two leaders continued to hold discussions on the bilateral relations in a cordial, intimate, and open atmosphere.
President Phuc extended an invitation for Putin to soon visit Vietnam again and the Russian leader gladly accepted.