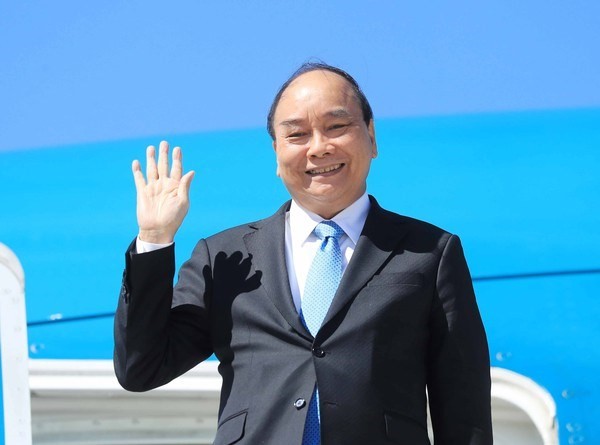 President Nguyen Xuan Phuc left New York for Hanoi on September 24 (local time) (Photo: VNA)
Talking to the press, the FM said the President’s trip has contributed to promoting the implementation of the external ties guidelines set by the 13th National Party Congress and delivered a strong message to the world on Vietnam’s foreign policy of independence, multilateralization and diversification, peace, friendship, cooperation and development, and that Vietnam is a reliable friend, an active and responsible member of the international community.
Second, the trip affirmed the loyal solidarity, mutual support and comprehensive cooperation between Vietnam and Cuba. FM Son stressed that the visit by President Phuc has breathed new life and created a new momentum for the special traditional ties between the two countries, as manifested in the release of a joint statement covering all fields and the signing of many cooperative agreements in agriculture, health care, justice, communications and information, energy and tourism.
The FM noted that even when its domestic supply of Covid-19 vaccine is still not sufficient to cover the entire population, Cuba still commits to provide Vietnam with 10 million doses of its Abdala vaccine, with 1 million doses delivered right during President Phuc’s visit.
He added that Vietnam, while still struggling with various difficulties since the pandemic broke out, has also presented Cuba 23,000 tonnes of rice, including 6,000 tonnes delivered during President Phuc’s visit, along with medical supplies, maize seeds and computers. 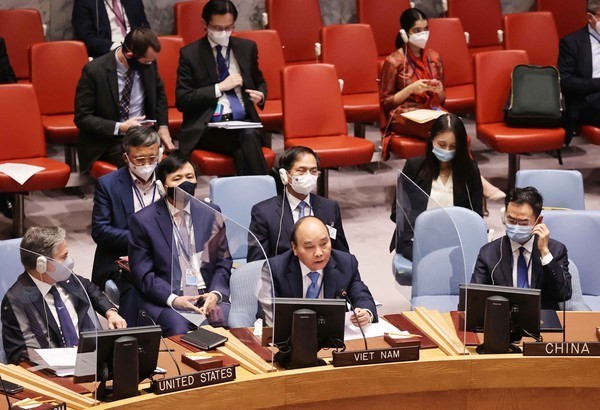 President Nguyen Xuan Phuc delivers a statement at the high-level open debate of the UN Security Council on Climate Security on September 23 (local time) in New York (Photo: VNA)
Third, the active participation of President Phuc’s in the high-level debates of the UN General Assembly, the UN Security Council and other UN meetings shows that Vietnam is a peace loving country with aspirations for development, which makes active and constructive contributions to global peace, security and development issues, especially the Covid-19 prevention and control and post-pandemic recovery and sustainable.
FM Son noted that the President’s messages and proposals at UN meetings have received approval, appreciation and warm response from leaders of many countries and partners.
The diplomat went on to say that President Phuc had made use of the occasion of the trip to New York for the UN high-level general debate to meet with leaders of many countries, international organisations and businesses, helping strengthen external relations and the favourable environment for national peace, stability and development.
In addition, the President’s trip has won the support of the international community for Vietnam’s efforts to control the pandemic and restore socio-economic development. FM Son noted that besides the 1 million doses of vaccine from Cuba which are brought home on the President’s flight back home, many partners have pledged to provide and sell vaccines to Vietnam. For example, the Republic of Korea promised to deliver more than 1 million doses of vaccine in mid-October and Hungary pledged to immediately deliver 400,000 doses. The Northwestern Medicine group will provide medical equipment worth US$3.8 million, the Thermo Fisher, 270,000 test kits worth $2 million and David Duong, an overseas Vietnamese, 1,000 ventilators. 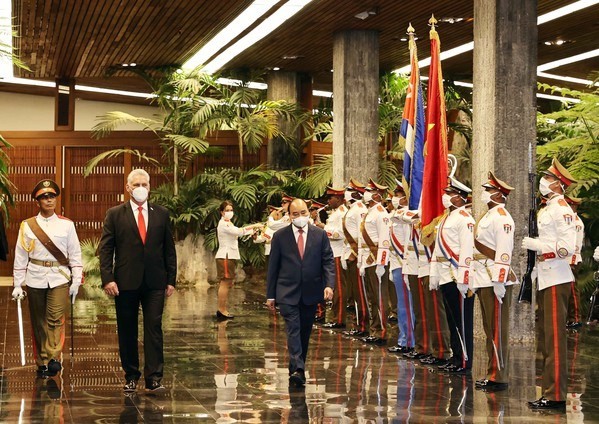 At the welcoming ceremony for President Nguyen Xuan Phuc in Havana (Photo: VNA)
The diplomat also highlighted that during the President’s trip, many leading groups signed contracts and agreements worth billions of USD with Vietnamese counterparts. The trip also helped strengthen the international business community’s trust in Vietnam.

Regarding orientations and focus of the Vietnam-Cuba partnership in the new context, FM Son said that the two sides will concentrate on comprehensively promoting their special traditional friendship through the Party, State and people diplomacy channels across all fields of politics-diplomacy, defence, security as well as socio-economy.
He said the two sides will optimise the existing cooperation mechanisms to increase the exchange of theory and practical experience in socialism building and socio-economic development in each country.
According to Son, Vietnam and Cuba will further expand and deepen economic partnership to match their sound political relations, focusing on agriculture, information technology, tranport, tourism, health care, pharmaceuticals, and vaccine production.
He added that Vietnam and Cuba will continue to unite, coordinate with and support each other at multilateral forums, thus enhancing the position of each country and making more positive contributions to peace, stability, national independence, democracy and social progress in the world.
Mentioning Vietnam’s plans for engagement in UN activities and common work of the world, Son said that in the time to come, Vietnam will prioritise the strengthening of its involvement in UN activities while promoting its role and unique identity through practical initiatives.
In addition, Vietnam will increase its participation in UN peacekeeping operations and the implementation of UN top priorities, such as stamping out Covid-19, promoting sustainable and inclusive post-pandemic recovery and development, realizing Sustainable Development Goals, delivering on commitments on environmental protection, ensuring and promoting human rights, and promoting the restructuring of the UN, he said.
The FM stressed that Vietnam will continue to make full use of the support from UN agencies in resources, expertise and experience for national development in following years. Boosting the practical and effective cooperation with the UN will help Vietnam deepen ties with countries, partners as well as other multilateral organisations and forums, contributing to maintaining the peaceful and stable environment as well as mobilising international resources for the country’s socio-economic development and enhancing its position in the world arena, Son concluded.