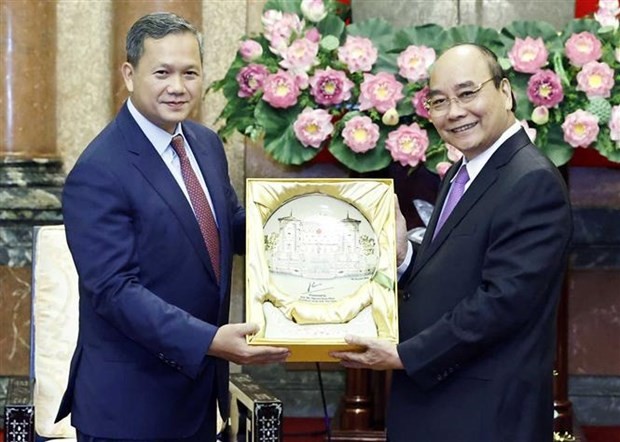 President Nguyen Xuan Phuc (right) and Lt. Gen. Hun Manet, Deputy Commander-in-Chief of the Royal Cambodian Armed Forces (RCAF) and Commander of the Royal Cambodian Army (Photo: VNA)
The President expressed his hope that Hun Manet’s visit will significantly contribute to the success of the Vietnam-Cambodia Friendship Year 2022 marking the 55th anniversary of the bilateral diplomatic ties (June 24, 1967).
Phuc congratulated Cambodian people on great, comprehensive achievements they have recorded over the past time, and noted his belief that Cambodia will gain more attainments in both home and external affairs in the time ahead, and successfully fulfill its ASEAN Chairmanship 2022 and organise its general elections in 2023.
Highlighting the traditional friendship between the two neighbouring countries, the President said he hopes that the Lt. Gen., in both his current and future positions, will make more contributions to preserving and developing the good neighborliness, traditional friendship and comprehensive, sustainable, long-term cooperation.
For his part, Hun Manet also congratulated Vietnamese people on their achievements, especially in Covid-19 prevention and control, socio-economic recovery and development and the organisation of the 31st Southeast Asian Games (SEA Games 31).
He conveyed the deep gratitude of Cambodian people to the Vietnamese Party, State, army and people for their support during Cambodia’s struggle against the genocidal regime as well as the present cause of national construction and development.
The officer also thanked Vietnam for backing Cambodia in performing the role of ASEAN Chair 2022, suggesting the two countries strengthen their solidarity in the face of regional and international uncertainties.
The two sides noted with pleasure active developments of the Vietnam-Cambodia multi-faceted cooperation, especially joint efforts in maintaining all-level meetings at all channels and coordination in organising activities within the friendship year.
They said two-way trade has maintained its growth, hitting US$6.3 billion  in the first half of this year, up more than 20 percent year-on-year.
Emphasising the progress in defence cooperation - an important pillar in the bilateral ties, host and guest expressed their hope that the collaboration will grow further for peace, stability, independence and self-reliance in each country.
Phuc asked Hun Manet to convey his wishes and regards to King Norodom Sihamoni, Prime Minister Hun Sen and other senior leaders of Cambodia.