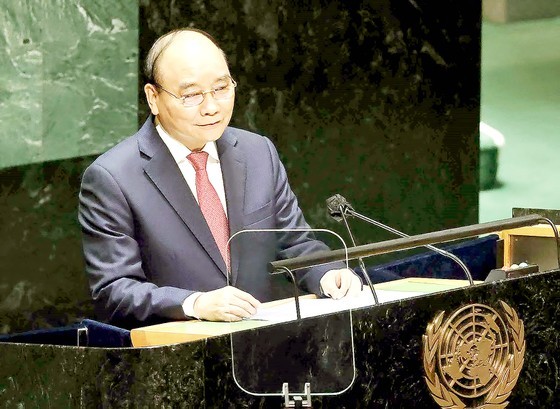 He said the devastating impacts of climate change remain evident in every continent. The consequences may well erupt into geopolitical tension and instability, damaging peace, security, development and prosperity of states and nations.
Against such backdrop, the President proposed three solutions, saying the UNSC and the UN at large should act vigorously.
First, the UNSC must uphold its leading role in establishing mechanisms for assessment, forecast and warning of climate security risks at the early stage and while they are still distant, Phuc said.
Second, he continued, the people's interest, especially that of vulnerable groups, needs to take centre stage in order to harmoniously address the inseparable relationship between security, development and humanitarian activities.
Third, it is necessary to continue to safeguard the sovereignty, key role and resilience of nations in climate change mitigation and adaptation efforts.
“We also need to step up international cooperation to supplement and coordinate resources to effectively realise the 2030 SDGs, the Paris Agreement, and other key international treaties,” he added.
Phuc affirmed that Vietnam is determined and strongly committed to take climate action, and develop a green, sustainable and low-carbon economy as pledged at the COP 21.
Vietnam supports all efforts to respond to climate-related challenges at the UNSC, at multilateral forums, and at other cooperation arrangements at the bilateral and regional levels, he said.
Phuc and other delegates shared their deep concern over the adverse impacts of climate change on international peace and security, saying the international community needs to take stronger actions to handle the issue.
UN Secretary-General António Guterres said developed countries must uphold their promise to deliver – before COP26 – US$100 billion in climate finance annually to the developing world.
Climate adaptation and peacebuilding can and should reinforce each other, he said.