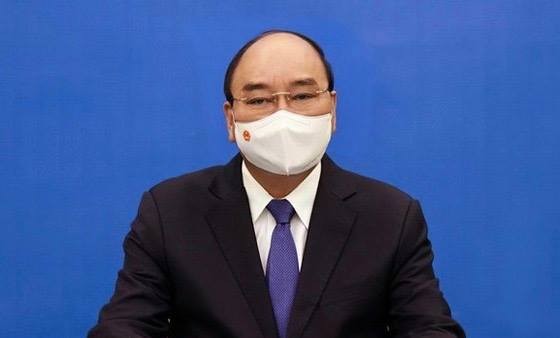 President Nguyen Xuan Phuc (Photo: VNA)
Both leaders affirmed they treasure and are delighted at the fruitful development of the relationship between Vietnam and the UN over the past years.
President Phuc highly evaluated contributions that Guterres has made in the last term, and showed his support for priorities and directions of the UN Secretary-General in the next five years.
As a responsible member of the UN, Vietnam has made positive contributions to the common affairs of the UN by performing the role of a non-permanent member of the UN Security Council and engaging in UN peacekeeping operations, implementing the Sustainable Development Goals (SDGs) and running for a seat in the UN Human Rights Council in the 2023-2025 tenure, said the Vietnamese leader.
Highlighting Vietnam’s efforts in implementing the “dual target” of fighting the COVID-19 pandemic and boosting socio-economic development, President Phuc thanked the UN for supporting Vietnam over the recent times and proposed that UN organisations continue to assist Vietnam, especially in accessing vaccine supplies and post-pandemic recovery consultancy.
For his part, Guterres lauded Vietnam’s socio-economic achievements, especially its success in COVID-19 prevention and control.
Having recognised positive and responsible contributions that Vietnam has made to the UN and in global issues, especially in the UN Security Council's operations, the implementation of the SDGs, climate change response and COVID-19 control, the UN leader said that Vietnam is an important factor that has contributed to the maintenance of peace and stability in the region.
Guterres highly appreciated Vietnam’s efforts in treating a UN staff member who had contracted COVID-19, which, he said, showed the international solidarity to overcome the pandemic.
Regarding regional and international issues, both leaders underlined the importance of maintaining and promoting peace, stability, and security, safety and freedom of navigation in line with international law, including the 1982 UN Convention on the Law of the Sea (UNCLOS), affirming the central role of the Association of Southeast Asian Nations (ASEAN) in dealing with regional issues.
Earlier, President Phuc also sent a letter of congratulations to the re-appointed UN Secretary-General, in which he expressed his belief that with his commitments, experience and prestige, the UN leader will continue to make contributions to enhancing the UN's role in the common efforts to settle global challenges.