The country has successfully played a leading role at the UNSC - the UN’s most important body responsible for maintaining world peace and security.

Vietnam’s achievements were fulfilled amid the effects of the COVID-19 pandemic, rising conflicts, and a serious political crisis in Myanmar, which like Vietnam is a member of ASEAN.

Vietnam picks right highlights during month of its UNSC presidency

Ambassador Olof Skoog, Head of the EU Delegation to the UN, Ambassador Fatima Kyari Mohammed, Permanent Observer of the African Union to the UN, and Ambassador Geraldine Byrne Nason, Ireland's Permanent Representative to the UN, highly valued a debate on cooperation between the UN and regional and sub-regional organisations proposed by Vietnam. 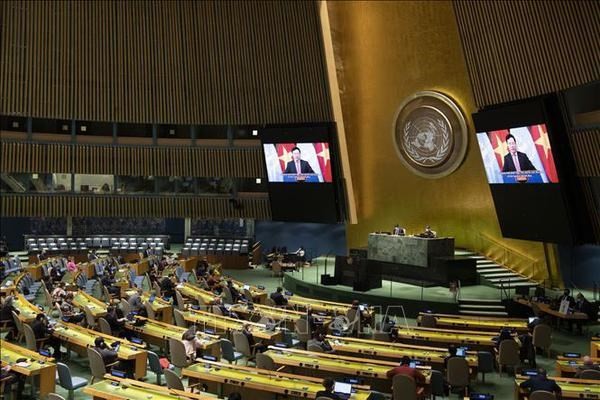 Skoog hailed the major topics that Vietnam picked for April as the UNSC President, especially those related to cooperation between the UN and regional organisations, reconciliation diplomacy and confidence-building measures.
According to him, at present, the situation is tense in many parts of the world, but the UNSC unfortunately has not been able to issue a resolution on every issue. Therefore, Vietnam's emphasis on trust building is a very good approach to seek support from other countries in promoting the council’s agendas.

Vietnam’s successes at the UNSC are not easy in the context of on-going COVID-19 outbreaks and increasing intense conflicts across the world, and political instability in Myanmar – a member country of ASEAN.

Three high-level discussions initiated and chaired by Vietnam - the High-level Open Debate on "Cooperation between the UN and regional organisations in enhancing confidence-building and dialogue in conflict prevention and resolution”, the open debate on “Mine action and sustaining peace: Stronger partnerships for better delivery”, and the in-person and online debate on “Protection of Objects Indispensable to the Survival of the Civilian Population” - have been hailed by the international community.

At the first debate, chaired by State President Nguyen Xuan Phuc on April 19, Vietnam expressed its strong commitment as a country that always strives to build trust and dialogue, act as a bridge to seek peaceful solutions to conflicts around the world via the UN Charter, international law, and closer joint work between the UN, organisations and multilateral mechanisms.

As the only ASEAN representative at the UNSC, Vietnam upheld the spirit of the bloc, prompting UN Secretary General Antonio Guterres to recognise the importance of Southeast Asia in reconciliation diplomacy, conflict prevention, and the building of international peace. 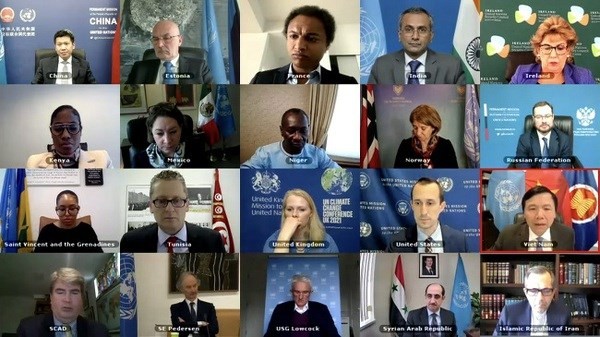 Achievements in partnerships between the UN and regional organisations can be seen in various areas, from reconciliation, anti-terrorism, and the maintenance of peace to the protection of human rights, climate change response, and COVID-19 prevention.

The UN Secretary General hailed Vietnam’s initiative to lift ties between the UN and regional organisations to new heights and to further uphold a spirit of multilateralism.

He also committed to supporting Vietnam’s proposal to trust building and dialogue on conflict prevention, despite the challenges posed by the pandemic.

Heads of permanent delegations to the UN and international organisations all expressed their support achievements made by Vietnam, affirming that the country’s contributions left positive impressions on the UNSC in particular and the international community in general.

UN Secretary General Antonio Guterres and leaders of UNSC member countries highly evaluated Vietnam’s initiative to organise the High-level Open Debate on “"Cooperation between the UN and regional organisations in enhancing confidence-building and dialogue in conflict prevention and resolution" - the most important highlight in April chaired by Vietnamese President Nguyen Xuan Phuc.

Many comments said that Vietnam's proposal to host this important event was timely and practical, in the context that protracted conflicts around the world could not be resolved because one of the leading reason is the lack of trust among parties and the inability to establish dialogues.

Skoog said “it was a very good debate”, adding that the EU side is “very strong supportive of the UN.”

The UN needs support as it “cannot do everything everywhere by itself,” he said, highlighting the important role by regional organisations in conflict prevention and resolution since they have trust and confidence among parties of conflict.

He stated that in the context of increasing tense situation in many parts of the world, Vietnam's emphasis on trust building is a very good approach to seek support from other countries in promoting the council’s agendas.

Meanwhile, Ambassador Fatima Kyari Mohammed, Permanent Observer of the African Union (AU) to the UN, appreciated Vietnam's promotion of discussions on strengthening dialogue and conflict settlement through peaceful means, putting people at the centre, prioritizing humanitarian policies and intensifying relationships with regional organisations. She stressed that all of these contents are very consistent with the priorities of the AU, an alliance that always wants to tighten its cooperation with other regional organisations, especially ASEAN.

Regarding the High-level Open Debate on “Protection of Objects Indispensable to the Survival of the Civilian Population”, Ambassador Geraldine Byrne Nason, Ireland's Permanent Representative to the UN, said the debate focused on issues closely related to human life and Vietnam has created its own imprint with the results of this session.

Ireland appreciated all three key topics that Vietnam brought to the discussion in April, she said, adding that her country’s attendance at all three high-level sessions chaired by Vietnam, showing that Ireland attaches great importance to Vietnam's Presidency of the UNSC as well as issues of substantial importance that Vietnam chose to put on table.

For the debate on “Mine action and sustaining peace: Stronger partnerships for better delivery”, Ilene Cohn, Officer-in-Charge of the UN Mine Action Service (UNMAS), stressed that Vietnam put forward the issue at the right point of time.

She noted that with Vietnam’s experience in dealing with post-war bombs and landmines, Vietnam can partly help the international community to deal with the problem which remains a major threat to people around the globe.

Ambassador T.S. Tirumurti, head of the Indian Mission to the UN, also highly valued Vietnam’s active and increasingly important role in the UN Security Council during the month it chaired the council.

The diplomat pointed out that the Indian Mission and Vietnam cooperated very closely at the UNSC, helping to bring stability to many regions and the council’s achievements. 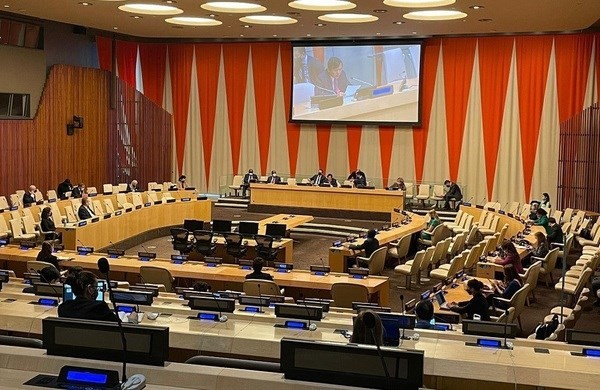 An overview of a UNSC session reviewing the activities of the council under the presidency of Vietnam (Photo: VNA)

Apart from working closely with the Vietnamese Mission to the UN in drafting the presidential statement and resolution, India looks forward to working with Vietnam in the coming months at the UNSC.
For his part, Ambassador Anouparb Vongnorkeo, head of the Lao Mission to the UN, stressed that Vietnam is playing an increasingly important role in the UN, especially in the UNSC.

He said he believes that the topics under the table are not only relevant, but will really contribute to promoting the implementation of programmes and activities to strengthen cooperation between the UN and regional organisations, and helping the UNSC approve timely resolutions to maintain global peace and security, especially in Asia.

The international community has evaluated what have been done by Vietnam during the month it served as President of the UNSC proves that Vietnam always actively contributed to all activities of the UN.

This further affirms that Vietnam confidently promotes its role and successfully fulfil its responsibility as a non-permanent member of the UNSC.

Vietnam has contributed to improving its position and ASEAN’s prestige in the international arena.

Successfully taking over the presidency month of the UNSC is also a more vivid demonstration of the effective implementation of the foreign policy outlined in the resolution of the out-going 13th Party Congress.