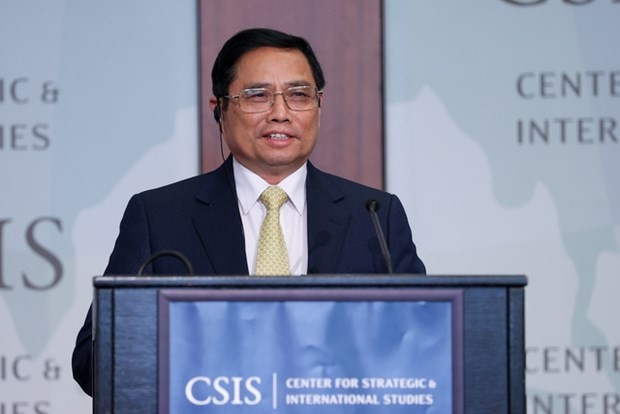 Prime Minister Pham Minh Chinh delivers a presentation at the Center for Strategic and International Studies (CSIS) in Washington D.C on May 11 (Photo: baochinhphu.vn)
The Vietnamese Government leader’s speech was broadcast live on technology platforms by CSIS.

In his welcome speech, Dr. John Hamre, President and CEO of CSIS, said that PM's arrival and presentation at the center was a privilege for CSIS. This is also the third time CSIS has welcomed Vietnamese leaders.

In his presentation, Prime Minister Pham Minh Chinh recalled that 77 years ago, President Ho Chi Minh opened the Declaration of Independence with the immortal truth: “All men are created equal. They are endowed by their Creator with certain inalienable rights, among them are Life, Liberty, and the pursuit of Happiness." This is also the spirit of the Declaration of Independence of the US in 1776, he noted.

Nearly three decades of normalizing relations, the relationship between Vietnam and the US has borne fruit with sincerity, trust and responsibility as well as sympathy, sharing and mutual respect to achieve the goals of the two countries and their people. The two sides have overcome their differences and achieved fundamental principles for bilateral relations, as affirmed in the Vietnam-US Joint Vision Statement when General Secretary of the Communist Party of Vietnam Nguyen Phu Trong visited the US in 2015, which emphasizes respect for each other's political institutions, independence, sovereignty, and territorial integrity.

Vietnam appreciates the US’s continuous support for a strong and independent Vietnam over the past years. In 27 years since the two countries normalized relations, four consecutive US Presidents have visited Vietnam and left good impressions among the people of the two countries.

According to Prime Minister Pham Minh Chinh, in the context of profound, rapid and unpredictable changes in the international situation, both the Governments and academics need to strengthen coordination, exchange and sharing of ideas to build a better world together.

Prime Minister Pham Minh Chinh emphasized that as an active and responsible member of the Association of Southeast Asian Nations (ASEAN) and the international community, Vietnam always strives to contribute to dialogue and cooperation, and is willing to play a proactive and active role in accordance with their potential and position.

The PM said that Vietnam's development aspiration is associated with the aspiration for peace, stability, cooperation and development in the region and the world.

He expressed his hope that the US and its partners will cooperate and support Vietnam in realizing that strategic vision, saying that this will open up great opportunities for more comprehensive and deeper cooperation between Vietnam and the US and other countries.

Chinh affirmed that Vietnam consistently pursues the foreign policy of independence, self-reliance, peace, friendship, cooperation and development, diversification and multilateralization of relations; being a good friend and a reliable partner with countries around the world, and a responsible member of the international community.

Vietnam has always shown sincerity, consistency and transparency in building and implementing this policy, he stressed. 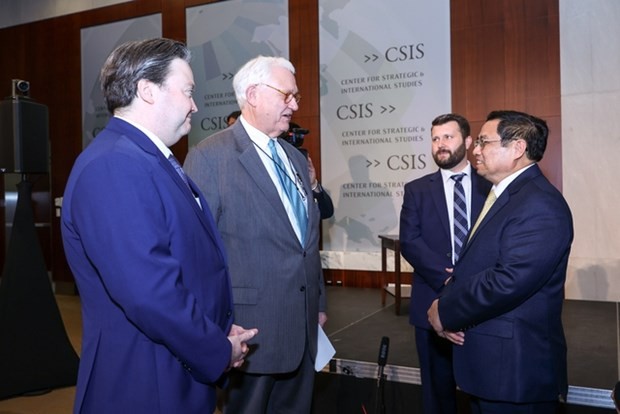 PM Pham Minh Chinh (R) discusses with the US Ambassador and a representative of CSIS (Photo: baochinhphu.vn)
Vietnam is ready for dialogue and cooperation to handle differences and disagreements, contributing to peace, stability and development in the world; and ensure the harmonization of interests and satisfactorily address the concerns of partners, countries and the international community, he stated.

For that reason, in the process of resolving disputes and conflicts in the region and the world, including the East Sea - an important sea for countries inside and outside the region, Vietnam has always advocated maintaining peace and stability; ensuring security, safety, and freedom of navigation and aviation; protecting legitimate rights and interests; settling disputes by peaceful measures and through dialogue on the basis of respect for international law, especially the 1982 United Nations Convention on the Law of the Sea (UNCLOS); effectively and fully implementing the Declaration on the Conduct of Parties in the East Sea (DOC), and working actively towards the early conclusion of an effective and substantive Code of Conduct in the East Sea (COC), PM Chinh said.

To contribute responsibly to common international and regional issues, Vietnam has actively participated in and promoted its role in multilateral mechanisms, especially ASEAN, the UN and regional and inter-regional, and Mekong sub-region cooperation mechanisms in accordance with specific requirements, capabilities and conditions.

PM Chinh stated that Vietnam has been proactive, active and responsible in promoting its role as a non-permanent member of the United Nations Security Council for the 2008-2009 and 2020-2021 tenures. It has directly participated in and contributed military personnel to the United Nations peacekeeping force since June 2014. The country was also the venue for the 2nd US-DPRK Summit in 2019.

Regarding the Ukraine issue, Vietnam supports and is willing to join efforts and initiatives of the international community to facilitate the parties’ dialogues to find long-term and sustainable solutions, Chinh said, adding the country has provided humanitarian aid of US$500,000 for Ukraine.

During the Covid-19 pandemic, despite many difficulties, Vietnam has donated masks and medical supplies to 51 countries, including the US; and made financial contributions to the COVAX Program.

Although it is a developing country with numerous difficulties in socio-economic conditions, Vietnam has showed its great responsibility and determination in efforts to respond to climate change and fulfill its commitments under the Paris Agreement and at the 26th UN Climate Change Conference of the Parties (COP 26) in the UK to bringing net emissions to zero by 2050.

Vietnam has been strongly promoting economic, trade and investment cooperation with almost all countries in the world. In particular, it has negotiated and signed 15 free trade agreements (FTAs), opening up a large free trade market with more than 60 countries and partners, including all major economies in the world, thus demonstrating its responsibility in the realization of equality and free trade.

For the US, the Government leader said that Vietnam always wishes to strengthen cooperation with the US on a basis of sincerity, continue to reinforce trust and enhance the responsibilities of both sides, for the common interests of the two countries’ people as well as for peace, cooperation and development in the region and the world.

Vietnam and the US have come a long way in showing sincerity and building mutual trust. First of all, the two sides have focused on and showed their determination in overcoming the war consequences. Since the normalization of relations in 1995, the bilateral relations have continuously developed in many aspects.

On the basis of their nearly three-decade relationship, Prime Minister Pham Minh Chinh stressed the need for sincerity, trust, respect and continued responsibility in overcoming the war consequences, in order to heal the wounds of both peoples and foster the cooperation between the two countries to meet the aspirations and interests of their people, and contribute to peace and stability, cooperation and development in the region and the world, as confirmed by the two sides during the visit to the US by General Secretary of the Communist Party of Vietnam Central Committee Nguyen Phu Trong in 2015.

The head of the Vietnamese Government affirmed that as the US and many countries are looking to the Indo-Pacific region, while Vietnam is promoting the implementation of aspirational development goals, the two countries is facing new opportunities to develop their comprehensive partnership in a stable, long-term, substantive, effective and intensive manner, especially in terms of economy, trade, investment, science and technology, digital transformation, high-quality human resources training and climate change adaptation as well as in solving international and regional issues.

He expressed his belief that these will also be key factors in guiding, promoting, and bringing the comprehensive partnership between Vietnam and the US to a new height in the coming years.

After the presentation, the PM answered many questions raised by CSIS scholars regarding Vietnam - US relations, the implementation of commitments at COP 26, and the Indo-Pacific initiative.

The presentation and answers of Prime Minister Pham Minh Chinh at the CSIS were warmly welcomed by participating scholars and experts.