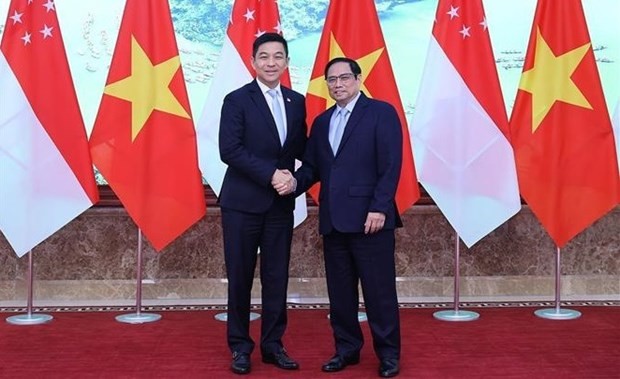 He expressed his delight that despite the Covid-19 pandemic’s impacts, bilateral trade has still been on the rise, and Singapore is the largest ASEAN investor in Vietnam with 2,866 valid projects worth US$67.56 billion.

Thanking Singapore for its precious and timely provision of medical supplies and Covid-19 vaccines, the Government leader of Vietnam asked both sides to bolster partnership in developing and manufacturing Covid-19 vaccines and medication.

He also called for stronger ties in defense - security, culture, tourism, and people-to-people exchange, as well as for new development impulses in the fields that match Singapore’s strength and Vietnam’s demand.

For his part, Speaker Tan highly valued the Vietnamese economy, one of the fastest growing in the region, noting that economic cooperation is an important stepping stone in bilateral relations and still boasting huge potential.

The meeting between PM Pham Minh Chinh and Speaker of Singaporean Parliament Tan Chuan-Jin in Hanoi on May 20 (Photo: VNA)
He informed his host of the two parliaments' memorandum of understanding on cooperation and affirmed that the Singaporean Parliament backs the two Governments' cooperation, Singaporean enterprises’ investment in Vietnam, and the expansion of Vietnam - Singapore Industrial Parks (VSIP) to more localities so as to tighten and improve the effectiveness of the countries’ friendship and cooperation.

At the meeting, the two leaders also discussed the regional and global situation, along with issues of common concern.

They stressed that ASEAN needs to stay persistent in its principled stance on the East Sea issue, which is peacefully resolving disputes on the basis of international law, including the 1982 UN Convention on the Law of the Sea (UNCLOS). They also underlined the importance of ensuring peace, freedom, security, and safety of navigation and overflight in the East Sea.