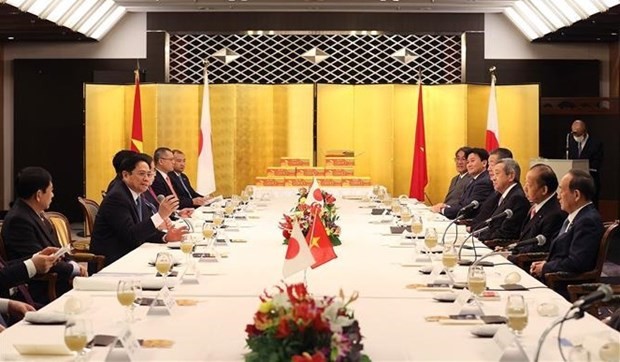 The meeting is part of PM Chinh’s first official visit to the Northeast Asian country from November 22 to 25.
Describing Japan as a strategic partner of leading importance to Vietnam, he noted with satisfaction that the two countries’ extensive strategic partnership has been growing strongly in all fields with high political trust.
He thanked Suga Yoshihide and Nikai Toshihiro, who is also former Secretary-General of the Liberal Democratic Party (LDP) of Japan, for actively promoting the Japanese Government’s emergency vaccine assistance for Vietnam in the face of the complex Covid-19 situation. 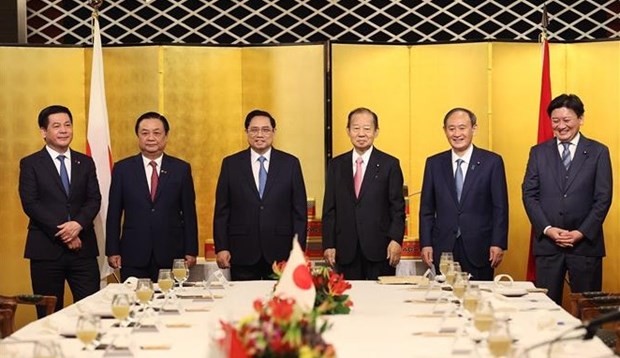 PM Chinh highly valued the active and effective contributions by Suga, Nikai, and members of the Parliamentary Friendship Alliance to the fruitful development of the extensive strategic partnership in all areas, including economy, trade, investment, and people-to-people exchange.
PM Chinh called on them to keep helping strengthen the ties between the two countries’ parliaments, parliamentarians, and young leaders, and bring into play the role of parliamentary friendship groups.
For his part, Nikai affirmed that the Japan - Vietnam Parliamentary Friendship Alliance will make more contributions to bilateral relations by stepping up activities for enhancing friendship and mutual understanding between the two peoples, including the young, thereby creating new opportunities for their multifaceted cooperation.
On this occasion, PM Chinh attended an event marking the export of the Unshu mandarin, a specialty fruit of Japan, to Vietnam.