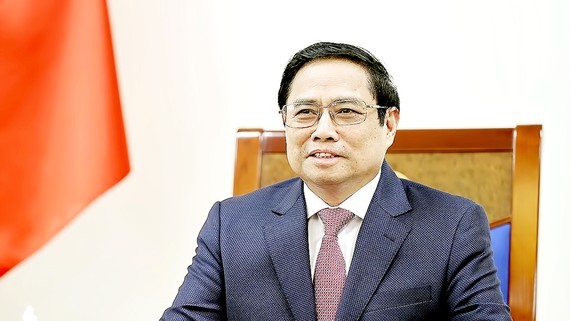 On the occasion of the 73rd anniversary of National Day of China (October 1), he believed that China will fulfill the goal of building a modern, strong, democratic and civilized socialist country.

Wishing the upcoming 20th National Congress of the Communist Party of China (CPC) a success, the PM also took the occasion to thank the Chinese Government and people for providing Vietnam with millions of Covid-19 vaccine doses and medical equipment when the pandemic broke out in the country.

The two sides agreed to facilitate all-level visits, especially making the best preparations for high-level visits following the 20th National Congress of the CPC, deepen practical ties as well as exchanges and travelling between their people.

PM Chinh suggested both sides work closely together to lift two-way trade in a stable and balanced manner. He asked China to create favorable conditions for customs clearance, expand imports and step up the opening of market for Vietnamese farm produce, fully resume the operation of border gate pairs and improve the capacity of customs clearance, as well as make the best use of opportunities from multilateral free trade agreements.

China is ready to resume people-to-people exchange activities, welcome Vietnamese students to return to China and increase the frequency of commercial flights between both sides, he said.

The Vietnamese PM suggested both sides continue realizing three legal documents on land border between Vietnam and China; jointly maintain peace and stability, and properly handle maritime issues in the spirit of high-level common perceptions and the Vietnam – China Agreement on basic principles guiding the settlement of issues at sea, accelerate talks about issues at sea, and settle disputes and disagreements by peaceful means in accordance with international law, particularly the 1982 UN Convention on the Law of the Sea (UNCLOS).

The two leaders pledged to direct both sides to continue upholding mechanisms about negotiations on demarcation and cooperation at sea, fully and effectively implement the Declaration on the Conduct of Parties in the East Sea together with ASEAN member states, toward reaching a practical, effective and efficient Code of Conduct in the East Sea in line with international law, including the 1982 UNCLOS.