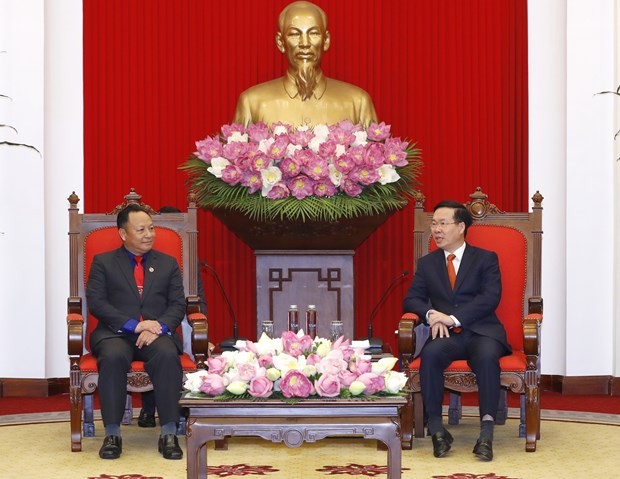 Monxay Laomuasong, alternate member of the Lao People’s Revolutionary Party Central Committee and Secretary of the LPRYU Central Committee, informed his host about outcomes of the cooperation agreement between the two youth unions.

He affirmed that the LPRYU will keep close coordination with the Ho Chi Minh Communist Youth Union to carry out directions issued by the countries’ leaders, educate the young on traditional Vietnam - Laos relations, increase mutual assistance, and intensify the unions’ cooperation in a practical and effective manner, thus contributing to relations between the two Parties, countries and peoples.

Speaking highly of the unions’ ties, Thuong said the great friendship, special solidarity and comprehensive cooperation between Vietnam and Laos founded by late Presidents Ho Chi Minh and Kaysone Phomvihane and nurtured by generations of the countries’ leaders and people, is a priceless common asset.

The mission of the youth unions of Vietnam and Laos is to maintain, nurture and continue developing this special and faithful solidarity, he emphasized.

The official added amid the complicated global and regional situation, it is even more important for the unions to stay united, work more closely together, continue their reforms in a dynamic and creative way, and share experience to further contribute to the development of each nation as well as bilateral relations.