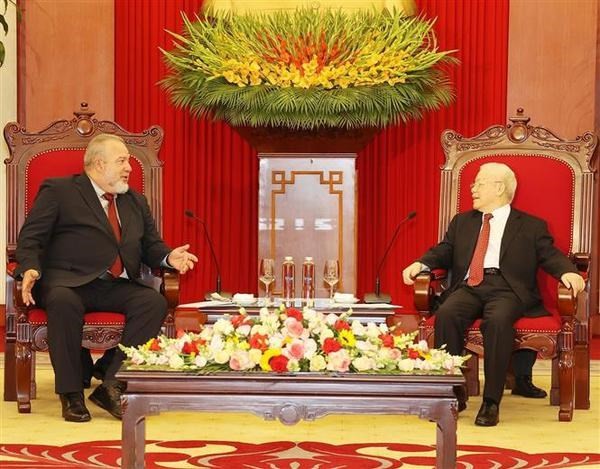 General Secretary of the Communist Party of Vietnam Nguyen Phu Trong (right) and Cuban Prime Minister Manuel Marrero Cruz. (Photo: VNA)
He made the statement on September 29 at a reception for Cuban Prime Minister Manuel Marrero Cruz, who is in Vietnam for an official visit from September 28 to October 2.
The Party leader warmly welcomed and spoke highly of the significance of PM Cruz's visit to Vietnam, saying that it will contribute to deepening the special traditional friendship between the two countries and strengthening cooperation between the two parties and nations.
He congratulated the Cuban PM on being awarded the noble Ho Chi Minh Order of the Vietnamese Party, State and people during the visit.
The General Secretary also shared the challenges that Cuba is facing, especially those caused by the embargo, the negative impacts of the Covid-19 pandemic, and recent incidents that caused great damage to people and property. He affirmed that the Vietnamese Party, State and people will support the Cuban Party, State and people to the best of their ability.
The Party chief suggested the two sides enhance coordination and actively boost relations across all three channels, namely Party diplomacy, State diplomacy and people-to-people diplomacy, as well as effectively carrying out cooperation agreements.
On this occasion, he asked the Cuban PM to convey his regards to General Raúl Castro Ruz; First Secretary of the Communist Party of Cuba Central Committee and President of Cuba Miguel Díaz-Canel, and other Cuban leaders, and expressed his hope to welcome them to visit Vietnam again.
PM Cruz, for his part, expressed his delight to visit Vietnam, and informed the host about the Cuban situation, its efforts to overcome difficulties and develop.
The Cuban PM thanked Vietnam for its cooperation and assistance and expressed his confidence that under the leadership of the Communist Party of Vietnam, the Vietnamese people will continue to gain greater achievements, successfully implementing the Resolution of the 13th National Party Congress.
He conveyed the invitations of Díaz-Canel and other Cuban leaders to General Secretary Trong to visit Cuba at an appropriate time.