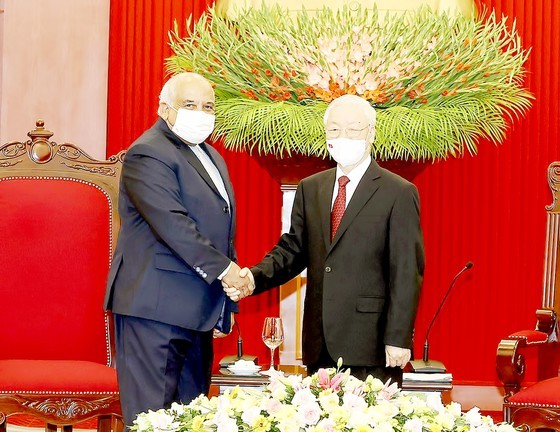 General Secretary Trong expressed his belief that with his wealth of experience, the ambassador will make active and effective contributions to consolidating and deepening the special friendship between the two Parties and nations.
He suggested both sides continue with high-level exchanges among ministries and agencies, uphold existing cooperation mechanisms, carry out agreed plans and projects, and consider new fields of their strength.

The host also took the occasion to thank the Cuban Party, State and people for staying ready to help Vietnam, especially in Covid-19 vaccine cooperation. He expressed his belief that under the leadership of the Communist Party of Cuba (PCC), the Cuban people will overcome difficulties and successfully build a prosperous and sustainable communist nation.

Ambassador Guillén, for his part, spoke highly of bilateral collaboration in various fields and timely support that the fraternal Vietnamese Party, State and people provided for their Cuban counterparts amid the Covid-19 pandemic.

He vowed to do his best to make active and effective contributions to the special friendship between the two Parties and countries during his tenure.

The diplomat informed the host about achievements in the implementation of the Resolution adopted by the PCC’s eighth Congress in April, adding that Cuba is striving to complete vaccination for the entire population this year and gradually embark on the post-pandemic economic development strategy.