The pandemic has skewed economic statistics around the world, leaving governments and economists struggling to determine policy and performance at a crucial point in the crisis.

Just when policymakers have to make some of the most important decisions on the economic effects of Covid-19 vaccines, and on lifting restrictions and stimulus to fuel recovery, official and unofficial data are giving inconsistent and potentially misleading signals.

Problems in data collection, the effects of coronavirus support policies themselves and a breakdown in previously cast-iron relationships between data and business performance are making accurate assessments elusive.

According to Nigel Pain, head of the short-term outlook at the OECD, “we haven’t any reason to doubt that statistical offices are doing an excellent job, but [the scale of the data issues] is something that we have to keep in the back of our mind”. With all economic data, the motto now is “handle with care”.

The monthly PMI indices have long enjoyed a reputation in Europe and the US as being among the most reliable early indicators of economic trends. Central banks have paid extremely close attention to them and regularly mention their movements in their accounts of policy meetings.

But, as barometers of economic performance, the PMIs are proving tricky. The headline figures seek to measure whether economic activity has strengthened or weakened since the previous month’s survey, a feature that should give extremely low results when Covid-19 restrictions are imposed, followed by extremely high ones when recoveries start as the economic swings are much larger than usual.

Whether it is because companies are reporting their level of output rather than the change from the previous month, the figures have become extremely difficult to interpret and do not reflect the changes happening in economies, said Lucrezia Reichlin, professor of economics at London Business School. Unlike in the past, she said, “if you base your forecast for what will happen to GDP in the second quarter on PMIs, then it will be too low — it won’t pick up the impact of vaccination drives and the fiscal package in the US”.

Chris Williamson, chief economist of IHS Markit, which produces PMI indices for most large economies in the world, accepted the indicators struggled to capture fully the extreme swings in output during the pandemic, but said they were still useful. The PMIs, he added, “did capture the turning points [in growth], which is the main thing”.

Faster indicators of economic performance have become popular during the pandemic, with real-time information on a huge range of subjects — including the movement of people, restaurant bookings, traffic flows and spending on credit cards — being analysed to discern the strength of economies.

Andy Haldane, the Bank of England’s chief economist, said last June that the shift to using faster indicators would be permanent because they would improve “the granularity and the timeliness of both our statistics and our understanding of economic trends”.

But some of the shine has come off these indicators. The OECD recently noted that the relationship between one of the most closely watched new indicators — Google’s movement data — and economic performance had changed during the final three quarters of 2020. 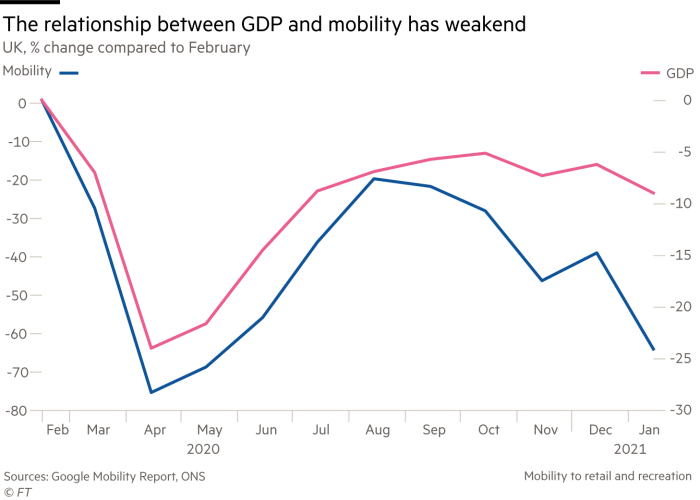 Its latest economic outlook noted a shift in the relationship between mobility and movements in gross domestic product as people have adapted to lockdowns — causing many forecasts based on this data to be too pessimistic.

The problem of policy disguising underlying trends besets unemployment statistics, especially in Europe. The US allowed companies to lay off workers and paid them generous benefits while unemployed, while European countries generally chose to pay companies to keep their workers on the books.

The result has been much higher and more volatile US unemployment alongside low and relatively stable European trends, although the underlying problem in labour markets has been identical. 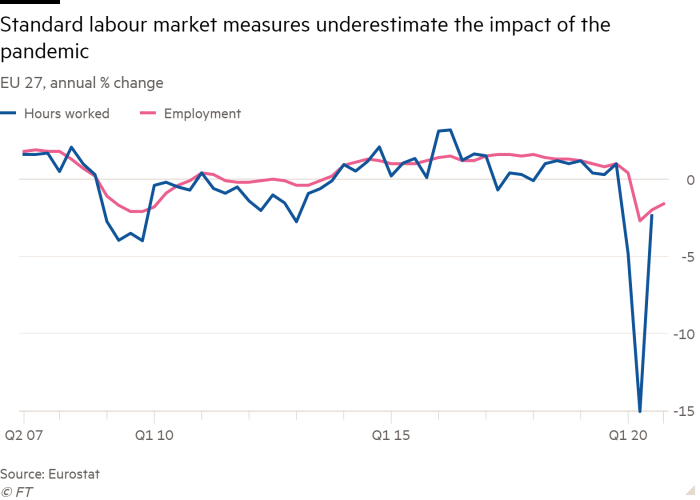 Carsten Brzeski, global head of macro for ING Research, said analysis based on official unemployment statistics would give “really blurred” results. “In the past we would have simply looked at the headline figure,” he said. “Now, at the very least, you have also to look at data on furlough schemes.”

The problem with inflation figures is that the traditional combination of goods and services used to measure prices no longer reflects household spending patterns. Some services, such as restaurant meals, are not available in many countries and households are spending much more on others such as digital downloads.

According to Marshall Reinsdorff, a senior economist in the IMF’s statistics department, actual prices of the goods and services people were buying rose faster than measured inflation in “nearly all regions” of the world during the first wave of the pandemic. 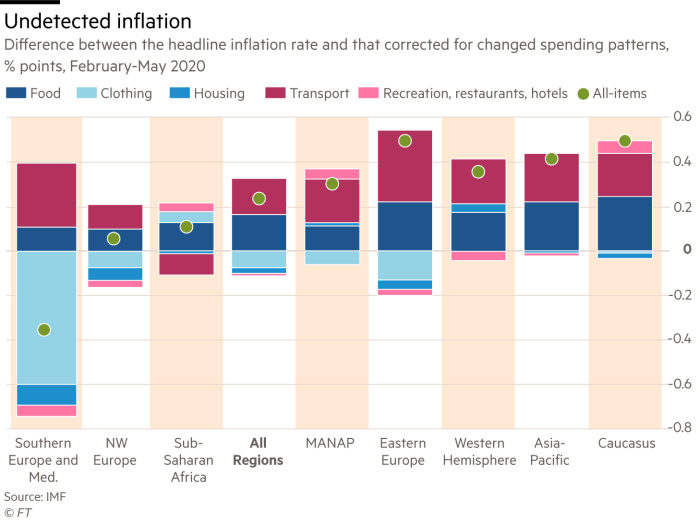 On average, inflation rates on the goods people bought were 0.23 percentage points higher, the IMF found in November.

As the world begins to worry about higher prices, it will be problematic if the official measures fail to reflect the truth, said Danae Kyriakopoulou, chief economist at policy think-tank OMFIF, but there is no easy solution. “Do you change the inflation basket just for the pandemic, because that creates issues of continuity?” she said.

GDP is usually the most important single economic statistic, giving a reasonably reliable and internationally comparable measure of short-term performance.

But with statistical agencies unable to do their normal surveys, there are reliability questions over figures and huge revisions as more information becomes available. On top of this, some methodological issues have been important, particularly in the measurement of the real output of public services.

The UK has been an outlier, with an approach to measuring volumes of public services that its Office for National Statistics has recognised was giving perverse results because it measured health output by items such as visits to local doctors and normal operations, and not coronavirus testing, tracing and vaccinations.

The OECD’s Pain said these issues had made international comparisons much more difficult, but expected this problem to be only temporary. “Over time, these issues should correct themselves, but it is something which has affected comparisons,” he said.