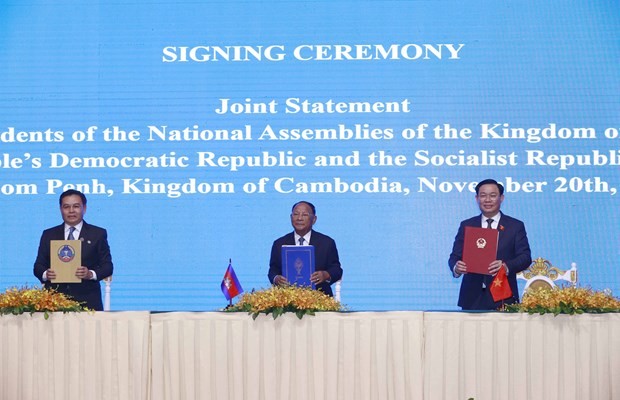 At the joint statement signing ceremony (Photo: VNA)
Signatories to the joint statement were Chairman of the Vietnamese National Assembly Vuong Dinh Hue, President of the Cambodian National Assembly Samdech Heng Samrin and Chairman of the Lao National Assembly Saysomphone Phomvihane.
The joint statement said the three NA leaders agreed to upgrade the current conference among the three NAs’ committees to the CLV Parliamentary Summit, which will be held every two years under the rotational chair of the leaders of the three NAs in alphabet order.
The joint statement affirmed that the establishment of the CLV Parliamentary Summit mechanism is aimed at promoting and strengthening the friendship, solidarity and comprehensive cooperation among the three countries, focusing on socio-economic development, defense-security cooperation and people’s exchange, for sustainable development of the three countries and the region as a whole.
The mechanism will promote and monitor the implementation of agreements, action programs and cooperation projects reached by the three Governments as well as of multilateral agreements to which the three countries are members; promote the sharing and exchange of information, experience and good practices in performing the functions and tasks of the three NAs; allocate budgets and discuss ways to mobilize capital from partners in and outside the CLV region to carry out programs and projects in the development triangle and other fields of cooperation.
After the signing ceremony, representatives of the three NAs granted an interview to the press, affirming that this is a historic milestone in the legislative cooperation of Vietnam, Cambodia and Laos.