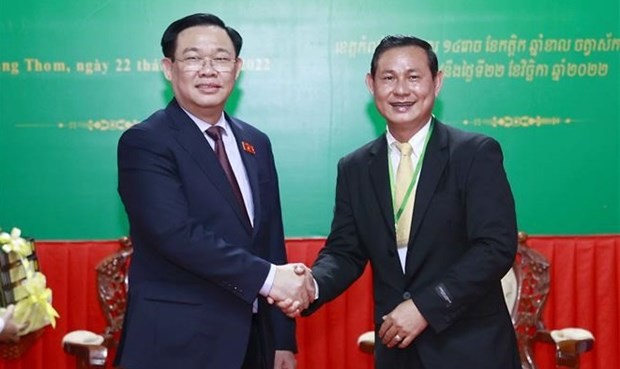 Welcoming the top Vietnamese legislator, Kampong Thom Vice Governor Nhek Ban Kheng briefed the guest on the socio-economic situation of the locality as well as the outcomes of its cooperation with the Vietnam Rubber Group (VRG).
Located 168km from Phnom Penh, Kampong Thom is now home to 11 Vietnamese firms in the field of rubber farming. The Vice Governor said that over the past 15 years, Vietnamese companies have contributed to local economic development by creating jobs and supporting infrastructure building, helping improve local living conditions.

He expressed hope that Vietnamese firms will invest more in the province, adding that the province also hopes for more aid from its twinned locality of Binh Phuoc to build a healthcare centre and upgrade roads.

He said that in his working sessions with Cambodian leaders, the two sides had shared delight at the sound cooperation between their countries. Currently, Vietnam is the largest investor among ASEAN countries in Cambodia and the fifth in the world. Leaders of the two countries agreed to further strengthen economic, trade and investment cooperation.

He also suggested that the province further strengthen collaboration with Vietnamese localities, while educating the youth on the need to reinforce solidarity, friendship and cooperation between the two countries. 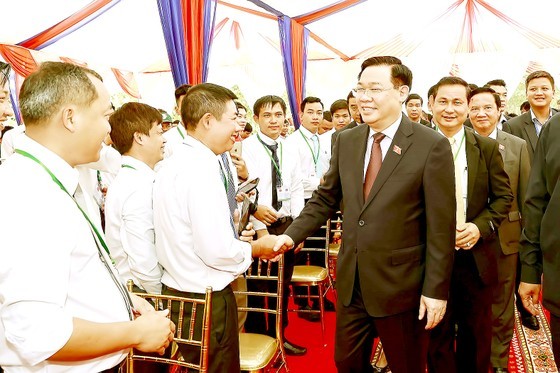 Tran Cong Kha, Chairman of VRG, said that the group and its member companies are operating in seven Cambodian provinces with total registered capital of US$1.18 billion, of which US$624 million has been disbursed. Last year, revenue from rubber projects in Cambodia reached US$160 million, with a profit of US$38 million, he said, adding that the projects have created jobs for nearly 16,000 labourers with an average wage of US$350 a month.

NA Chairman Hue praised Vietnamese businesses and investors’ contributions to the fruitful economic cooperation between the two countries, with two-way trade expected to reach US$11 billion this year.

He lauded the VRG and Vietnamese rubber companies’ efforts to overcome difficulties to expand rubber plantations in Cambodia to 23,000 hectares with a total output of about 46,000 tonnes.

The NA leader said he hoped the firms will work harder to complete their political and socio-economic missions assigned by the Party and State, while promoting ties between the two countries through social welfare activities.