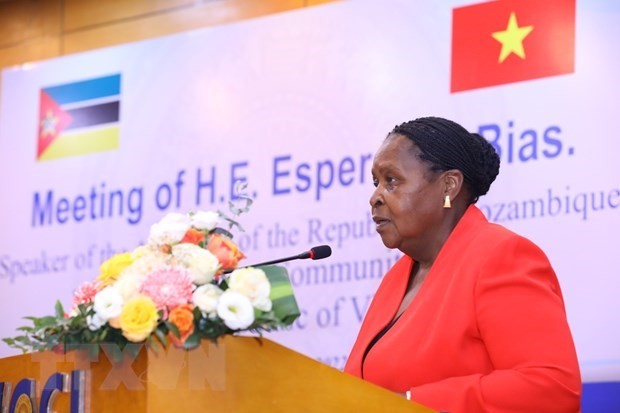 President of the Mozambican Assembly Esperanca Laurinda Francisco Nhiuane Bias speaks at the meeting. (Photo: VNA)
The President called on Vietnamese enterprises to invest in tourism, mining, energy and agriculture in which Mozambique has potential, noting that to support investors, the African nation has established a portal providing information for both private and state-owned firms.
She suggested Vietnamese and Mozambican businesses maximise benefits offered by cooperation agreements reached by the two countries, and expressed her hope that after the meeting, more Vietnamese firms will come to operate in Mozambique.
At the meeting, Chairman of the Vietnam Chamber of Commerce and Industry (VCCI) Pham Tan Cong emphasised that apart from political ties, bilateral economic and trade relations have seen positive signs over the past time. 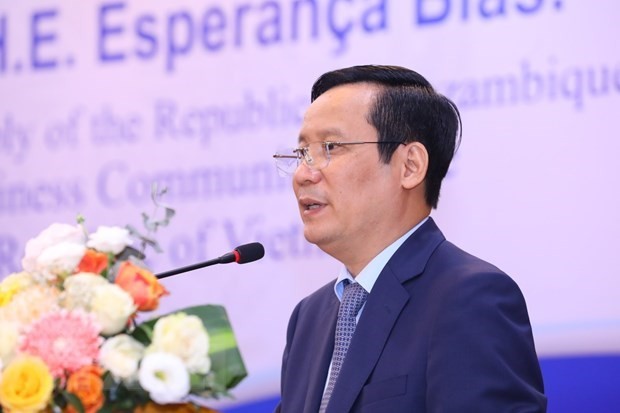 Chairman of the Vietnam Chamber of Commerce and Industry (VCCI) Pham Tan Cong speaks at the meeting. (Photo: VNA)
During the 2020-2021 period when the Covid-19 was still ravaging, two-way trade still exceeded US$150 million, he said, highlighting cooperation in investment and agriculture.
Pointing out optimal cooperation potential between the two countries, Cong suggested Vietnamese firms consider investment opportunities in Mozambique, particularly in agriculture, heavy industry, infrastructure, finance, health care, and information technology and telecommunications (ICT).
Along with traditional goods like rice, cable lines, fertilizers, garment-textiles, steel, cashew nuts and wood, among others, Vietnamese and Mozambican enterprises should expand the list of goods that can be exchanged such as farm produce, construction materials and medical equipment of Vietnam, and some agricultural products and minerals of Mozambique, Cong said.
The VCCI will cooperate with Mozambican competent agencies, and work as a bridge to promote the trade and investment ties, he promised.