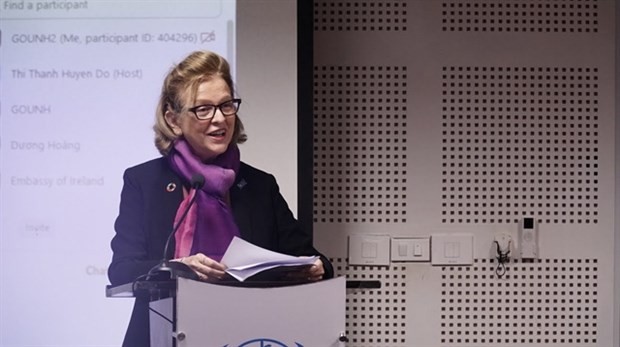 Caitlin Wiesen, UNDP Resident Representative in Vietnam. (Photo: VNA)
In an exclusive writing to the Vietnam News Agency ahead of the upcoming Vietnamese-led United Nations Security Council (UNSC) open debate on April 8 titled “Mine action and sustaining peace: Stronger partnerships for better deliver”, United Nations Development Program Resident Representative in Vietnam Caitlin Wiesen also made it clear that the strong sector coordination and collaboration are a “key driving force” to reach the milestones required to make Vietnam impact free by 2030.

“To the extent possible, the international community should commit to making the support predictable and long-term to align resources with government plans,” she wrote.
“Placing mine action at the forefront of Vietnamese chairmanship of the UNSC during this month is signal of global commitment, rooted in a conviction that the issue can be dealt with through strong regional and national institutions.”
The official also highlighted the remarkable achievements in the mine action sector in Vietnam over the recent past, pointing to the surveying of over 16,880 ha of land and the clearing of 9,000 ha of hazardous land in Quang Binh and Binh Dinh provinces as a result of the combined resources and perseverance of the Vietnam National Mine Action Centre, KOICA Vietnam and UNDP Vietnam.
Last December, Vietnam hosted a conference on “Women, Peace and Security”, following which the “Hanoi Commitment to Action” with 75 co-sponsors was submitted to the President of the UNSC and the President of the General Assembly, highlighting the importance of including women in building and sustaining peace, including mine action.
“We continue to encourage all partners to join this call for a decade of mine action to give back cleared land to local communities, leave no one behind and ensure we persevere in fulfilling the development aspirations of those most in need,” she concluded.